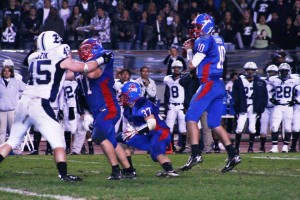 Early Wednesday morning, 22-year-old New Mexico Highlands gunner Taylor Genuser – with parents Steve and Barbara by his side — signed his SoCal Coyotes contract with the brazen air one expects from a Run ‘n’ Shoot specimen who was one of the top-ranked California quarterbacks out of Buchanan High School just three years ago.

Called upon to back up Nate Lewis, one of the best quarterbacks to ever play at the AAA level, the 6-3, 210-pound, cannon-armed Genuser boldly declared that “I’m excited to learn everything I can from Nate, but when my number is called, I will lead this team and make every throw in this offense. In my mind, the Coyotes have two starting quarterbacks.”

When the two signal-callers first spoke together on the phone Tuesday night, this brought a huge smile from Lewis, 27, a gunfighter with nerves of steel who also happens to be the 2012 National Player of the Year, owns every Coyote passing record, seven national records, and averages a touchdown every seven completions.

“Taylor is a really solid athlete who understands what we do here,” said Lewis, who missed three Coyote games last season while battling for a spot with the Arena Football League’s San Jose Sabercats. “It’s a big deal that the Coyote organization is respected now as a place where players go to get better, get solid reps, get exposure, and play for championships.”

Within hours of talking to Lewis for the first time, Genuser was deep in his Coyote Run ‘n’ Shoot playbook. Like Lewis, the strong-armed Genuser had seen his promising college career at New Mexico Highlands cut short by injury, and pro scouts recommended he play a season of AAA football with the SoCal Coyotes to polish his considerable skills.

All roads pointed to the desert, where Genuser will gain experience from the potent Run ‘n’ Shoot, while studying behind Lewis, a Tom Brady of AAA football who hopes to be headed back to the Arena Football League himself.

“The scouts rave over Taylor, and they called us,” said Coyotes head coach J. David Miller. “It’s unfortunate he got hurt. But when we looked at his film, there wasn’t a single throw he didn’t make.

“He has everything. He’s big, strong, intelligent, has a quick release, and like Nate, he’s extremely accurate with the deep ball. He’s well-coached and understands the vertical passing game. He’s been calling his own plays out of the gun since high school. He’s a character guy who will make everyone better, in practice, in the locker room, on the sidelines, and when he gets his chance to play. He couldn’t have a better tutor than Nate Lewis.”

Miller spoke at length with Genuser’s father, Steve, who is also a coach.

“After speaking with Mr. Genuser and his bride Barbara, it’s humbling that our program is trusted by not just the players, but also their parents,” Coach Miller said. “And the only thing better than having one gifted quarterback is having two.”

Taylor spent the spring coaching high school football. He will participate in two pro combines and a Fellowship of Christian Athletes conference at UCLA before reporting full-time to the Coyotes in July.

“I’m looking forward to working with Taylor,” said Lewis. “Taylor is young, and he’s coming in here to compete for my job. I’ll be waiting for him.”