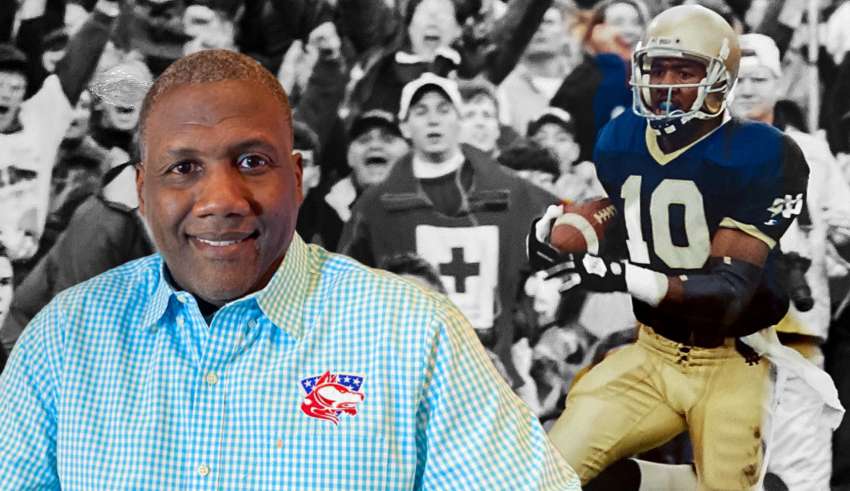 Jarrell, who earned a business degree in South Bend after four seasons in the Blue and Gold, also has been named Chief Administration and Data Officer by Coachella Sports & Entertainment Stadium Authority (CSESA), master developer of The Shield at 1 Coyote Way™.

Located at Date Palm and I-10 in Cathedral City, The Shield™ is a $1 billion mixed-used faith, sports, medical, tourism and entertainment development that will soon reshape the Coachella Valley skyline.

It was a long overdue reunion between Jarrell and CSESA CEO and Coyotes Head Coach J David Miller. Aside from the Arena Football League – where Adrian starred as a wide receiver during the league’s 90’s glory days – Jarrell’s first career job out of Notre Dame was as Chief Operating Officer for one of Miller’s early companies, Premier Nutraceuticals. 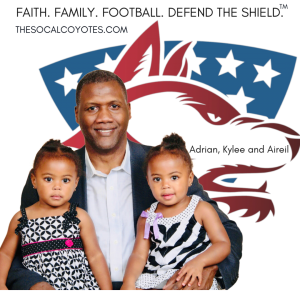 “First and foremost, Adrian loves the Lord, he loves his baby daughters, he loves family, and he understands the significance those roles play as a leader to young people in our community,” Coach Miller says. “AJ completely understands business, construction, development, and of course, the business of football.”

“Adrian is an analytics and economics talent,” Mayor Wilson says. “He understands how stadium economics works. He understands public policy and the importance of that as it pertains to stadium build-outs, commercial rights, media rights. Adrian has a complete and full understanding of the scope of the business of football.

“All of these things add up to a young, energetic, great hire for both CSESA and the Coyotes. He’s a great example for all of our young players, too – just a dynamic addition to the Coachella Valley community.”

Fighting Irish folklore is ingrained with Jarrell’s biggest moments. With one minute left in a critical game, AJ caught an 18-yard touchdown pass from Rick Mirer to beat Michigan in the heralded 1990 season opener. In the next game, he caught a deflected pass that went for 24 yards, setting up a last-minute, game-winning touchdown against Michigan State.

In his senior season, Jarrell scored on a game-tying 32-yard reverse and booted a 58-yard punt in Notre Dame’s upset of top-ranked Florida State.

Anyone who played four years for Lou Holtz, walked countless times up the the storied Notre Dame Stadium tunnel, and delivered miracles of his own under the outstretched arms of Touchdown Jesus – can appreciate the tradition, culture and championship pedigree the Coyotes are building.

“Coach Miller sees the Coyotes through a lens of generational history,” says Jarrell. “That requires generational vision. We have that here. Anybody in our building can sense these next 10 years are going to be life-changing for everybody in the Coachella Valley.”

Adrian Jarrell was a big shot coming out of Clarke Central High in Athens, Ga. Most publications rated him one of the top 20 high school football players in the nation, and he was recruited by every college football power.

But when Jarrell showed up for his first day of practice at Notre Dame, he quickly discovered there already were quite a few big shots in South Bend.

“Sitting behind Rocket (Ismail), I said to myself, ‘Whoa, I’ve got to study. Football may not be the only way to go,’” Jarrell smiles.

That realization years ago gave Jarrell the perspective he would need to flourish in both the Arena Football League, and throughout his remarkable business career in corporate finance. He has leapt into his new roles with (for-profit) CSESA and the (non-profit) Coyotes – where it’s his job to make sure both pencil out.

“I do the same thing I did as a player, when I would feel that flutter of pressure in the moment,” Adrian says. “You take a deep breath, and focus on the fundamentals. ‘Hey, line up at the right depth. Quick release. Good separation. Give the quarterback a window.’ Slow the game down to its fundamentals. It’s the same thing in business.

“It’s all about establishing the fundamentals and setting the new norms about how I will lead, and where we will go, as an organization.”

These days, he doesn’t just lead in the boardroom. As a single father of adopted five-year-old twins in a new home, AJ can’t afford a fumble, on or off the field.

Jarrell’s background as a person, football player and businessman makes him one of the most well-rounded candidates in Coyotes front-office history. When Miller introduced him to the CSESA staff in October, he said, “If we could custom design a leader for this important time in our history, it would be Adrian.”

His name, and fame, sold Arena Football League tickets at stadiums in Las Vegas, Anaheim, Milwaukee and Oklahoma. And Jarrell didn’t disappoint, racking up several thousand yards, and playing through spates of injuries. Upon retiring, he pursued his MBA from Notre Dame, and became as accomplished in the boardroom as the locker room.

Jarrell’s mind constructed data the way his hands once plucked footballs from the skies. Data spoke aloud to him, leaping from spreadsheets and proformas and worksheets. His mind spun numbers into analytics that could improve a company’s financial health, evaluate staff, project schedules and predict sales.

Jarrell became a hot commodity, whether hired to turn around beleaguered companies, or to help massive corporations like Home Depot achieve victories across multiple accounting fronts. He restored pride to franchises and opened doors for people of color, while soaring to senior executive positions typically reserved for whiter – and lesser qualified – counterparts.

“A side of me is a bit of a nerd,” AJ says. “When I was transitioning out of my football career, I relied on the analytic side of my brain. Complex business problems that companies and organizations face are fascinating to me. I love the whole intellectual perspective.” 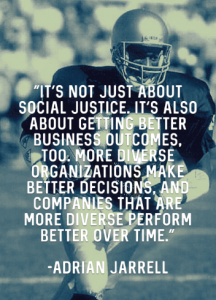 Jarrell comes to the Coyotes and CSESA at a time when the modern culture is more focused than ever on inclusion and diversity, and CSESA and the Coyotes are expecting him to lead in those areas – from the front of the room. Diversity, inclusion and the advancement of people of color always ranked among Jarrell’s passions.

AJ’s family has strong roots in key allied arenas. His great uncle Judge Daniel was a director in the NAACP, and helped defend civil rights cases in Athens, Ga. Fannie and Venus, Adrian’s mother and father, both were active in the civil rights movement.

Dad was a no-nonsense Army Specialist – it was always understood that if AJ didn’t make grades, he’d never see the field. Mom worked at the University of Georgia, so expectations were high for Jarrell and his three sisters.

In the Jarrell household, the definition of spectacular was consistency. Both grandparents worked in the same poultry plant for 46 years – even rode to work every day in the same car. His grandpa didn’t miss a day of work for the last 36 years he was there. “I went to their house every day after school,” Jarrell says. His parents worked the same jobs for 30-plus years.

“Nothing good happens without hard work,” AJ says. “We were frugal, but content. Discipline in our home was firm, but fair. My fondest memory as a kid was spending time with my family. We had a happy family, a structured family, a loving family. Those are the kind of values I want to help build in this community.”

Overcoming adversity has been a mainstay since AJ was three years old. Chronic asthma nearly kept Jarrell out of sports – he was frequently checked in and out of the hospital as a kid, and didn’t play football until he was eight. He has played through three concussions, a torn sternum, broken clavicle, cracked collarbone, six broken ribs, three surgically repaired fingers, two shoulder operations, and a foot surgery.

“Football teaches you resilience, to push through pain and find a way to win,” AJ says. “I’m excited to help CSESA build The Shield, and to work with all the Coyote players on how to develop professional opportunities and build lifelong relationships.

“As we say in football, ‘the eye in the sky don’t lie,” he continues. “We’re under a lot of scrutiny here with CSESA and the Coyotes. The Coachella Valley is watching us – the nation is watching us.

“Ultimately, we’ll be judged by our results. I hope the desert is ready. Both CSESA and the Coyotes are changing the culture, changing lives, changing the Valley, and building tradition.

“Just like my college days at South Bend – we’re making history here. There’s nowhere else I’d rather be.”