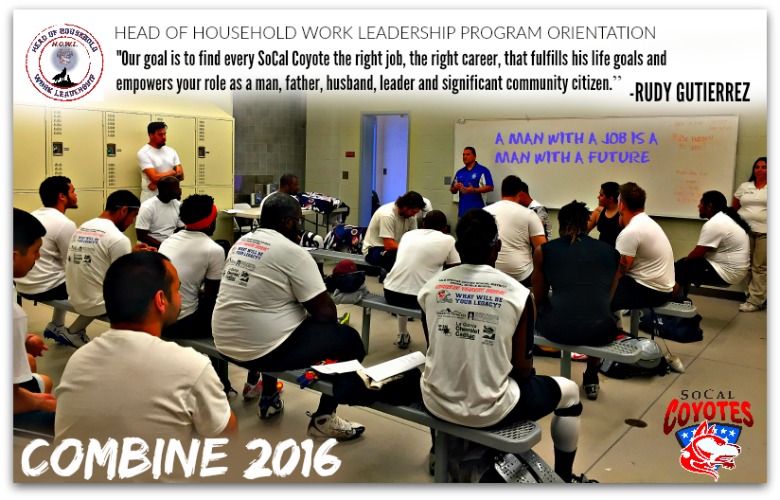 Each year, the corporate partners of the five-time champion SoCal Coyotes get the first opportunity to ‘HOWL’ with the non-profit leadership organization, sifting through the impressive resumes of qualified players in the team’s Head of Household Work Leadership program.

“The percentage of all players who make it to the NFL is small,” says Coyotes head coach J David Miller, “but society demands that 100-percent of our players make it as gainfully employed young men, husbands, fathers, fearless leaders, and responsible community citizens.”

The Coyotes live by their creed of ‘Building Champions, Building Men,’ and partners like Vantage Point Construction, General Air Conditioning & Big Rock Pub are among the Coyotes’ supporters who embrace their Coachella Valley employment initiatives.

AMERICA’S #1 DEVELOPMENTAL Pro Football Program requires players to be gainfully employed while ‘chasing the dream’ of professional football, and the Coyotes’ HOWL program is designed to provide demonstrable skills that produce sustainable incomes, matching them with employment opportunities.

Coyote executives spend hours each week teaching players even the tiniest job-procuring details, such as how to craft a professional resume.

“None of our staff is immune to the simplest tasks,” says team president Don West Jr., a former sports agent and entrepreneur. West once represented some of the NFL’s most dominant superstars, including Andre Johnson, Ricky Williams and Warrick Dunn. Now a Los Angeles business executive, West volunteers his time to the Coyote organization, and the HOWL program is near to his heart.

According to West, “There are certain truths in life and one of those truths is that there will always be a life after football for every person who steps onto the gridiron. It is of critical importance that each young man in our program develops a plan and the corresponding skills and experience required to be successful in their lives off the field.

“Too often, low-income young men, especially of color, have very little opportunity to be exposed to careers, build work experience and history, and establish a network of employers and connections who can vouch for their skills and employability.”

Shane Helms, VP Football Operations, says the team’s HOWL program “is successful if it does nothing more than provide social access and exposure to young men in our program to get jobs, and present opportunities for them to become significant comm 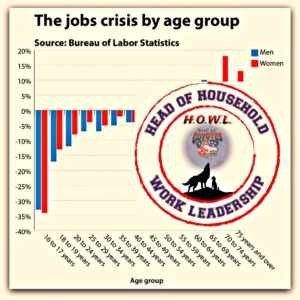 THE IMPORTANCE OF INVESTING in programs that help individuals and families achieve and maintain economic self-sufficiency through well-paying, higher skilled jobs is the lifeblood of successful communities. Often the chronically unemployed or underemployed lack the necessary skills and training required to secure better paying jobs or positions that offer opportunities for advancement. Long-term, HOWL will recruit, enroll and train program-eligible candidates for various employment opportunities.

Thus employment is the underpinning of a young man’s development, “and important for their successful progression through young adulthood,” insists Coach Miller. “Ages 20 through 25 – our biggest demographic – are critical development years, as young people prepare to take on adult responsibilities.”

Coyote executives point to key predictors of consistent employment in adulthood – early exposure to the world of work through year-round employment, internships, and service opportunities, all of which the team is developing. 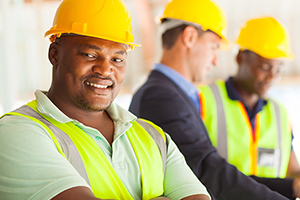 The real winner is the Coachella Valley, where the heralded Coyotes organization annually improves their desert home, one bite at a time. Beyond the many developmental benefits, employment changes the quality of community life. Dollars earned are most often spent within the community, so the ripple effects improve the local economies of entire neighborhoods.

HOWL bridges Coyotes players into positions that range from entry-level construction, warehouse, and apprentice positions, all the way to senior sales and management prospects/trainees.

THERE ARE MORE THAN JUST TAX BENEFITS for companies who support HOWL. In a word, the entire Coyote program runs on discipline, and the athletes they present through HOWL come in the door highly motivated, clean-cut, and driven to succeed. Most are college educated. Their Coyote player contracts include pro football’s strictest Code of Conduct, with no tolerance for substance abuse. They are also stars in the community – player participation in the Coyotes’ numerous community youth outreach programs is mandatory.

More than 500 players have come through the Coyote program since 2012. Many have discovered their future as a Coachella Valley resident, where they serve as head of households and community leaders. Coyotes dot the desert’s business landscape in industries that include energy, education, healthcare, real estate, hospitality and retail.

“The Coyotes are a conveyor belt to manhood,” Coach Miller smiles. “The young rookies come in each year with their hats on sideways, but they leave as men with their hats, their heads and their hearts on straight. Our young men are engineered to make a positive impact in every home, every job, every community, wherever they live, work and play.”