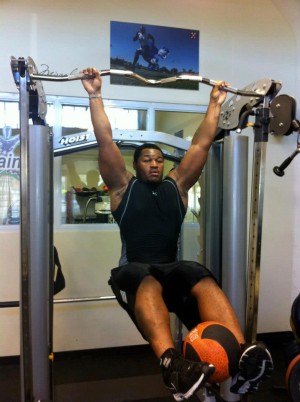 (NEW ORLEANS) — The SoCal Coyotes added a little spice to their Darkside Defense this morning when former Southeast Louisiana University linebacker Devin “Big Easy” Jones, 5-11, 255, signed his contract and packed his bags for the desert.

Jones, 22, the Most Valuable Player of the Bayou Bowl (see video), had private workouts with the Miami Dolphins and New Orleans Saints before signing with the AAA Coyotes. He also worked out for head coach Pat O’Hara of the Arena Football League’s New Orleans Voodoo.

“I’m excited to become a Coyote,” Jones said from New Orleans. “This is the best program, and the best opportunity, for me to get to the next level. Scouts recommended I play here. The Coyotes have great players like Cedric Cox and Bo Bovain, and I can’t wait to meet them. I’m here to do my part to win a championship.”

During his best college season at Southeast, Jones had 75 tackles, three forced fumbles and three sacks, and became known as a physical, downhill attacker with great speed (4.62), incredible power and leadership.

“We are adding missing pieces all across the board,” said Coyote head coach J. David Miller. “Great players make great plays. Devin is a dominating linebacker, the best one out there when he was on the field in high school and college. Other teams have to account for him on every snap. That is going to leave one of our other great players unblocked. Our coaches believe it’s going to get downright nasty with Devin in the mix.

“It’s a tribute to our players, and our program, to have Devin sent here by other coaches and scouts, and to know our friends in the Arena League have their eyes on him,” Coach Miller added. “This is good for Devin, but also good for the rest of our players who are working for their opportunity, too. The Coyotes are on the radar.”

Last fall, in his only season of AAA football as a member of the Louisiana Lightning, the disruptive inside linebacker was the defensive team captain, started all 12 games and had 83 tackles, three pass deflections, four forced fumbles, three sacks and seven tackles for losses. At Independence High School, Jones was an All-State 10-3A Most Valuable Player as a senior.

Players like kicker Dan Kelly, and now Jones, are realizing the benefits of the entire SoCal Coyotes program, which unlike most AAA teams, is not bound by geographic limitations. Jones will immediately join the team’s HOWL program (Head of household Work Leadership) upon his arrival.

Jones will be on the field when the team opens practice July 23 at Xavier College Prep. He will make his Coyote debut on August 24 at home against the San Diego Spartans.

The Coyotes will compete this fall in the UFAL Eastern Division of the powerful Southern California Football Alliance, the only path for a desert team to win a state, or national, championship. The SCFA is home to the Inglewood Blackhawks, the perennial national champions, and the California Raiders, UFAL champions.