Home Uncategorized HIS WORK IS A PURPOSE, NOT A PLACE’: MICHAEL KARLS NAMED APFL’S FIRST MOST VALUABLE PLAYER AFTER ‘IRREFUTABLE’ 21-TD SEASON 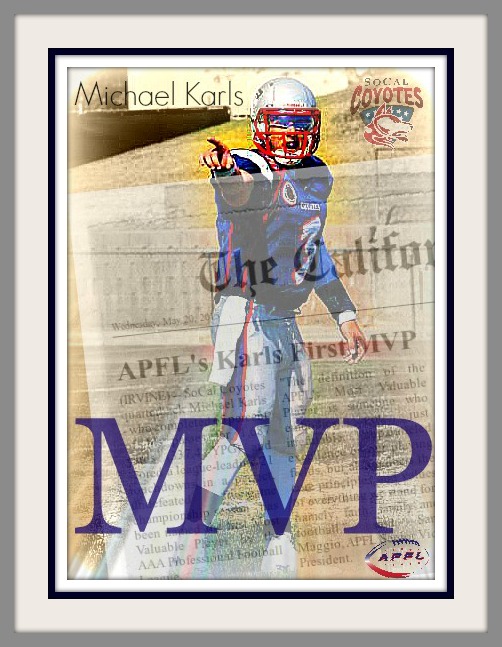 (IRVINE) — SoCal Coyotes quarterback Michael Karls – who completed 65 percent of his passes for a league-leading 1,687 yards (337.4 YPG) and 21 touchdowns in a perfect, undefeated five-game championship season – has been named the first Most Valuable Player by the AAA Professional Football League. “The definition of the APFL’s Most Valuable Player is someone who embodies not only irrefutable, unparalleled excellence on our playing fields, but also reflects the core principles and values of everything we stand for, namely, faith, family and football,” said Sam Maggio, APFL General Manager. “Michael Karls creates meaning in everything he does,” Maggio said. “His work is a purpose, not a place. He is driven by service to others, not himself. By going beyond the mere engagement of football and pursuing a higher calling as a man, he has earned the recognition, respect, attention and responsibility that most people chase, but few ever catch.”In the “irrefutable and unparalleled” department, Karls was peerless, exceeding performances from other APFL quarterbacks who were plucked from the developmental APFL to play in higher pro leagues. Among APFL quarterbacks with at least 100 attempts, Karls’ NFL quarterback rating was a league-high 117.4, and his 21 total touchdowns were nine better than the APFL’s next best – Coyote teammate James Calhoun (12). In the APFL title game – and with a perfect season on the line – Karls completed 72 percent of his passes for 330 yards and three touchdowns. “This is a team award,” said Karls, who has played in 19 games as a Coyote, winning 18. As a starting quarterback, he is 15-1, with 13 300-yard games and 58 touchdowns. “Nothing in football gets accomplished without the mental toughness and determination of every player and coach associated with being a team. “I am humbled to be a part of an organization where God truly comes first, family is next, but winning is an absolute and uncompromising priority. Our team goals represent all three.“I wouldn’t be here without each of the great players that make us the SoCal Coyotes,” he added. “The great part about our sport is that nothing comes easy – each member of this team fully understands that we are judged and remembered only by results.”Off the field, Karls was the team’s most visible volunteer. He served with the local Rotary Club, Galilee Food Bank, Boys & Girls Club, and was a guest speaker at every local middle school and charity function. A business graduate from Midland University, Karls was also an APFL intern, a fact not lost on league brass. “Perhaps the greatest irony here is the new league MVP spent the weeks leading up to the season as an intern, selflessly assembling press packets, helmets and equipment for each charter APFL team,” said Maggio. “He helped prepare and equip the very opponents who would be unable to stop him in three states and four cities. That’s a dose of humility you’ll probably never see again in pro sports, and one we’ll be talking about for a long, long time.” THE AAA PROFESSIONAL FOOTBALL LEAGUE is the nation’s fastest-growing developmental franchise football opportunity, founded on America’s #1 developmental program. A lifeline to stranded developmental players, the APFL pays modest stipends and offers insurance, while developing players who seek NFL, CFL or AFL discovery.The APFL ‘Builds Champions by Building Men’ through employment and leadership opportunities, challenging its players to ‘Be Paid, Be Insured, Be Discovered – and Be a Man.’For more information on the APFL, visit www.aaapfl.com.