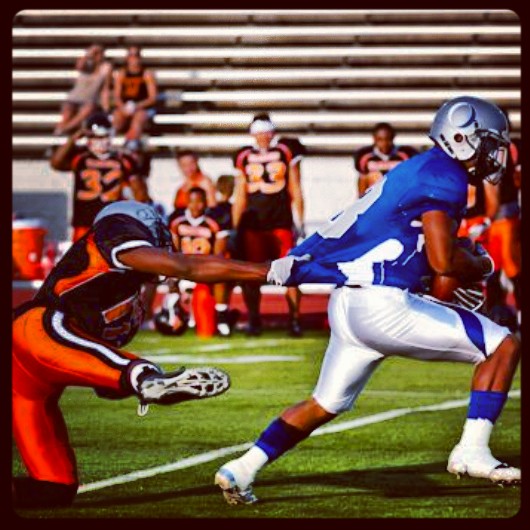 The SoCal Coyotes added another 4.4 weapon to their Run ‘n’ Shoot arsenal this morning with the signing of 5-10, 195-pound wideout Andrew “A.J.” Allen, 24, a former University of Central Arkansas star who brings with him a wealth of experience from two indoor leagues and the attention of pro scouts.

“Call us the Silver Stretch,” smiled head coach J. David Miller, referencing the Coyotes’ new silver helmets. “Every snap we’ll have four guys hitting the gas and two guys on the sidelines catching their breath. It’s going to be a track meet, 100 miles per hour, no fair dodging.”

Allen, a native of Dallas, was second-team All-Conference at Central Arkansas, and has since turned heads with his 4.4 40 time, 10’-2″ broad jump and 4.16 and 4.17 short shuttle times, which have led to workouts in the CFL, NFL and United Football League.

He has played as a wide receiver, kick returner and running back for the Iowa Barnstormers of the Arena Football League and Wenatchee Venom of the Indoor Football League, while spending time in the camps of the Toronto Argonauts, Hamilton TigerCats and Winnipeg Blue Bombers. His NFL workouts attracted the interest of the New York Giants and Philadelphia Eagles.

In his final year at Central Arkansas, Allen had 1,200 all-purpose yards, including 30 receptions for 399 yards (13.3 yards per catch). He averaged 31 yards per return on kickoffs, including an 88-yard touchdown, while rushing for over 600 yards and four touchdowns.

“I’m here to learn from the coaches and to be a part of this great Coyote family,” Allen said. “I’m not coming into this program thinking I know everything. I’m coming in humble. If they ask me to block every game, if that’s what it takes to win a championship, then that’s what I’ll do.

“I believe that whatever talent God has blessed you with, no matter if it is sports, the workforce, or in the community, never be scared to release what God has given you to share,” Allen said. “God has a way of showing us things. He will be there right on time.”

The 2012 Pac West champion Coyotes open at home at Xavier College Prep on August 24 against San Diego, in the UFAL Eastern Division of the Southern California Football Alliance.