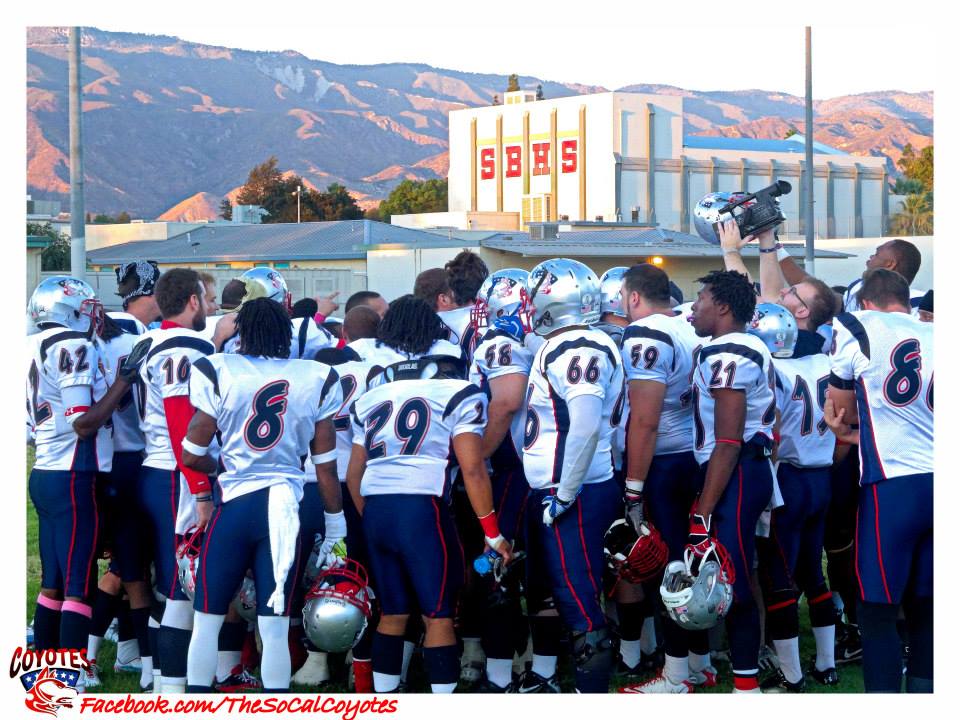 (SAN BERNARDINO) — The 10th-ranked California Raiders were knocked from their pedestal Saturday night when the upstart 5-1 SoCal Coyotes rallied from a 27-3 first-quarter blowout to beat the UFAL league champions, 36-33.

With the win, the Coyotes take sole possession of first place in the United Football Alliance League, the eastern division of the vaunted Southern California Football Alliance, the only means for a desert team to win a state or national championship.

The Raiders’ reign as three-time league champions is all but over, and the Coyotes control their own destiny. SoCal comes home for the next two weeks against the Steelers and Lions, then travels to Inglewood to face the national champion Blackhawks.

The Coyotes are currently ranked 13th in the country, but the win could catapult them into the top five.

The Raiders, 6-1, exploded to a huge first-quarter lead, but then the Coyotes Darkside Defense, not their Silver Stretch offense, suddenly took control of the game.

Defensive back Shaine Boyle had two more interceptions for touchdowns to bring his incredulous total to eight in the past four weeks. Kicker Dan Kelly connected on booming field goals of 37, 24 and 54 yards. Rashad “The Franchise” Roberts hauled in a 78-yard touchdown.

Before the Raiders could blink, the Coyotes were back in the game and finally took the lead in the third quarter.

“Our defense carried us,” said head coach J. David Miller. “They kept getting stops, getting turnovers, and making huge plays. Our offense was good enough to keep us in the game. This was a huge win for the Coyote organization. All the credit goes to my players. To go on the road, in a hostile environment, against a perennial national power, and to come back the way we did, it doesn’t get any better than this.”