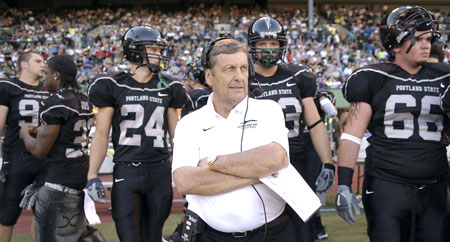 (PALM DESERT) — College of the Desert might be the last campus where legendary Darrel “Mouse” Davis — godfather of the Run ‘n’ Shoot and the modern pro offense — coaches his last game.

Davis will join the coaching staff of the host UFAL Champion SoCal Coyotes on the sidelines of COD’s Boone Field when they play the National All-Stars in the January 11, 2014 AAA Hall of Fame Bowl.

The night before, Davis will be the keynote speaker at the AAA Hall of Fame Awards at the Desert Princess in Cathedral City. Coyotes Brian “Porkchop” Gollnick (center) and J. David Miller (head coach) are among the 92 Class of 2013 enshrinees.

When the AAA Football Hall of Fame officially announced today that College of the Desert would host the AAA Hall of Fame Bowl, it meant a homecoming of sorts for at least half of Coyotes 53-man roster who played there at some point in their careers.

It also marks the first time in three seasons the upstart Coyotes have ever played at the school, located in the heart of Palm Desert. Twenty-four of 53 Coyotes can trace their roots to COD.

The Coyotes are a first-generation Run ‘n’ Shoot team under president and head coach J. David Miller, who has enjoyed a three-decade relationship with Davis.

The decorated career of Mouse Davis spans five generations. He was ground zero of the four-wide offense that became known as the Run ‘n’ Shoot and would evolve to the modern spread.

Davis revolutionized football, from his early days at Milwaukie High School in 1964, through the hallways and stadiums of the NCAA, the CFL, the USFL, the Arena Football League, and finally, under the unforgiving bright lights of the vaunted National Football League.

“To have Mouse Davis on our sidelines is bringing the mountain to Mohammad,” Miller smiled. “The Coyotes are blessed to have the opportunity to showcase the Coachella Valley and the Hall of Fame, and for us to share all of this with Mouse. He’s the Vince Lombardi of the modern passing game. It doesn’t get any better than this.”

Miller thanked COD athletic coordinator and head football coach Dean Dowty “for his ongoing trust in our organization and his behind-the-scenes efforts to bring the Hall of Fame Bowl to COD. The Coyotes promise to give the desert a great show.”

College of the Desert is located 15 minutes from Desert Princess Golf & Country Club, the official headquarters of the 2014 AAA Hall of Fame Bowl.

COD is five minutes from The Tilted Kilt, official post-game hotspot where Class of 2013 inductees, players and fans will meet and greet the public after the event.