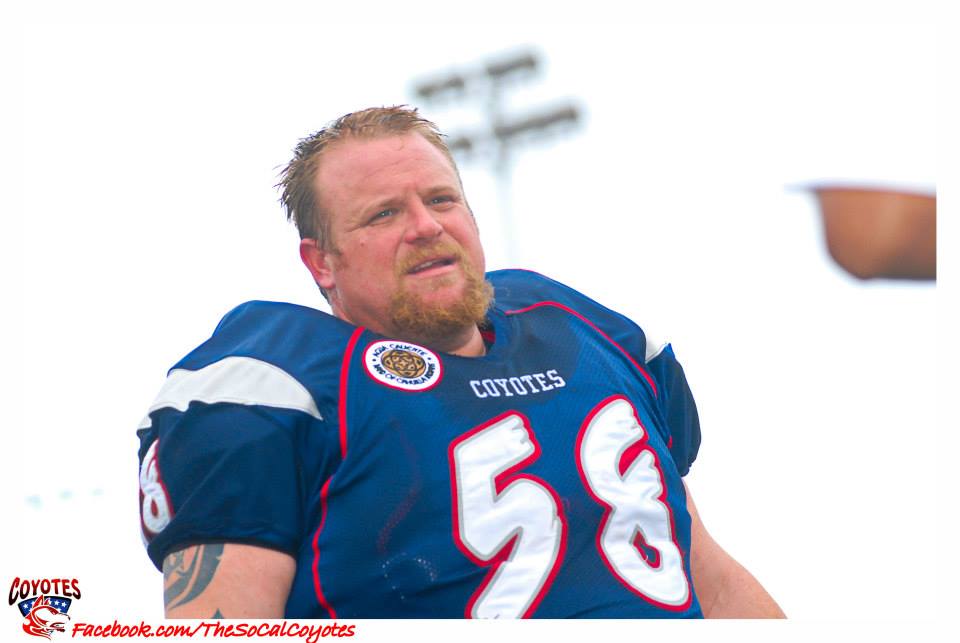 (HEMET) – After more than a decade of near-flawless All-American performances in four leagues with three teams in two states, 40-year-old SoCal Coyotes legendary center Brian “Porkchop” Gollnick received the phone call of a lifetime this afternoon from Dick Suess, commissioner of the AAA Football Hall of Fame.“Brian,” said the Commissioner. “I’d like to congratulate you on becoming the final selection of the Class of 2013. Welcome to the Hall of Fame.”A disbelieving Gollnick first thought it was a prank call – then realized this was actually “the” world-renowned Dick Suess, founder of the Minor League Football News Report and czar of AAA football.

“Seriously, I nearly crapped my pants,” recalls the 6-3, 330-pound Gollnick. “Mr. Suess knew all about my career and told me he couldn’t wait to meet me. From the first day you tie up your cleats, you dream about this moment. Not just as a football player, but as a leader, too.

“All I ever wanted was to earn the respect of my teammates and my opponents. For my peers to think enough of me to vote me in to the Hall of Fame – I’m speechless. I’m grateful to every single person who ever helped me get here.”

On Friday, January 10, Gollnick will join Coyotes head coach J. David Miller and the other inductees at the Desert Princess Golf & Country Club in Cathedral City, where he will take his place in history alongside keynote speaker Darrel “Mouse” Davis, godfather of the Run ‘n’ Shoot and the modern pro offense.

“It still hasn’t sunk in yet,” Gollnick says. “For me to be inducted next to Mouse Davis and Coach Miller, and have it all happen here in the desert … this is priceless.”

Born August 5, 1973, on a Marine base in Camp Lejeune, Brian Gollnick would grow up to set the standard for line play at Hemet High School, where he worked at both center and defensive tackle. A broken leg his senior season would require a metal plate and six screws, and the devastating injury – unbeknownst to Gollnick – would make major schools lose interest.

That didn’t prevent Gollnick from being voted the best offensive lineman at the Tom Moore OL/DL Football Camp at Riverside Community College in 1991, and from there he went on to start his freshman season at Mt. San Jacinto College, where he played in the Charity Bowl. But by his junior year, when a D-1 opportunity didn’t materialize, a disheartened Gollnick did the unthinkable: He quit football.

“Deep down in my heart, I always thought there was something big for me out there,” he says. “It broke my heart to quit. I love this game. But I was 20 years old. Every door seemed to be closing. At that age, when you’re delivering Domino’s Pizza, it feels like the end of the world.”

He took a factory job, operating injection molding machines that pumped out everything from plastic inhalers to fireman’s helmets. His family moved to Montana, and Brian followed, bouncing around at odd jobs, and staring at football on weekends wondering what might have been.

Until 2004, when he and some friends were approached after a flag football game and invited to a tryout with the Missoula Raptors of the Rocky Mountain Football League.

“It was freezing cold in Montana,” he recalls. “The tryout was in a gym, and it was packed. I didn’t think I had a prayer. We ran 40s and did agility drills, all the usual stuff. I promised myself that if I ever got a second chance, I would never waste one minute of my opportunity, ever again. Once I put that helmet on, my gears clicked. This time, I was mature. It really meant something to me, and I was going to make every snap count.”

In Gollnick’s comeback season, he earned honorable mention honors. After changing teams to the Bitterroot Blaze, Gollnick remained a perennial All-Star, and added All-American honors to his resume in 2007 from the Minor League Football News.

Gollnick teamed with guard Ben Nelson to form the M.O.B. – the Morbidly Obese Brothers. The pair paved the way for the “33 Blast” with running back Justin Nixon, who set a minor-league mark with 1,460 yards rushing and led the nation in scoring.

A knee injury broke his post-season string in 2008, but Brian bounced back in 2009-10 with two more All-Star, All-American seasons.

How good was Gollnick? He moved back to California in 2011, but the Blaze paid for him to commute, and with good reason – with Gollnick up front, they made the playoffs every season.

In 2012, he joined the expansion SoCal Coyotes, and got his first taste of the Run ‘n’ Shoot offense. The Coyotes won the Pac West championship in 2012, and the United Football Alliance League title in 2013.

For the past three seasons, Gollnick has protected quarterback Nate Lewis, whose 8,586 yards and 88 touchdowns – in 24 games played — are the most prolific in AAA history. Half of those have gone to teammate Rashad “The Franchise” Roberts. “Some of the greatest players I’ve ever seen,” he says of Lewis and Roberts.

One of the most colorful players in recent memory, Gollnick is equally famous for his outrageous eating habits, passion for gummy bears, love for comic books and zeal for life. But one of Gollnick’s achievements would stump the sharpest AAA historian – even the venerable Dick Suess. In the 2007 Rocky Mountain League title game, Gollnick was the game’s leading receiver.

“I lined up as a tackle eligible,” he chuckles. “How you overlook me is a little confusing, but they did.” Gollnick caught a 20-yard pass from quarterback Bucky Brawley – the game’s longest reception. “For one game,” he grins, “I was a leading receiver – look it up.”

Brawley – himself a Montana minor-league legend — will make the trip to Palm Springs to see his old pal inducted.

Gollnick, who cares for his mother Jane in Winchester while managing accounts from Indio to Santa Barbara for Corona-based Top Notch Plumbing & Heating, was asked earlier this year how he hoped to be remembered. “I don’t care,” he replied, “so long as I’m remembered.”

“This means everything to me,” he says. “I can’t believe it. I made it. Thank you to everybody. I love all of you. Nobody can take this away from me, and I feel like a super-duper hero tonight.”