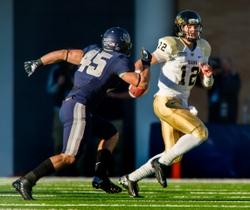 (ST. GEORGE, UT) — The UFAL Champion SoCal Coyotes continued their relentless pursuit of excellence Friday with the addition of Utah State linebacker Cade Cowdin, compared by one scout to “a young Clay Matthews … an ascending player who is just scratching the surface of his potential.”

Cowdin, 6-2, 225, was a first-team all conference selection at College of the Desert before playing at Oregon State and Utah State. During his first trip to the desert, Cowdin helped COD advance to the Beach Bowl in 2011.

Coming out of junior college, Cowdin had offers from UCLA, Iowa State, South Florida and Miami (Fla). Cowdin, 24, just graduated from Utah State and will join his new Coyote teammates in time for the AAA Hall of Fame Bowl January 11.

“I’m blessed and excited to get this opportunity,” Cowdin said. “I can’t wait to come back and represent the desert and play with the great veterans on this Coyote football team.”

A former coach described Cowdin as “a versatile defender who is a natural pass rusher off the edge … great upfield speed, good balance and burst, with great initial hand-punch to pop the blocker and disengage … tireless effort in pursuit … instinctive defender who is outstanding in space.”

What caught the eye of Coyotes head coach J. David Miller, however, was more than just Cowdin’s football measurables.

“He’s got lunch-bucket work ethic, class, character and attitude,” Miller said. “Say his name in any circle and you immediately hear about his discipline in the weight room, discipline on and off the field and his will to win.

“There’s a lot of guys with talent knocking on the Coyote door,” Miller added. “But we want D-1 players like Cade who also have great character to match. He’s going to make us a better football team.”