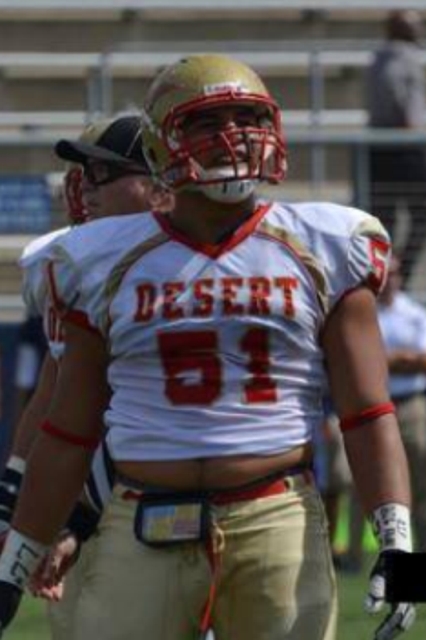 (PALM SPRINGS) – After the NFL took their best linebacker and with the AFL now courting their best sack artist, the UFAL Champion SoCal Coyotes today wasted no time signing 6-3, 265-pound College of the Desert speed rusher Rafael Lamas in time for the January 11 AAA Hall of Fame Bowl, now just 53 days away.

Scouts, coaches and owners from teams as far away as England will be in attendance.

“I’m humbled by the opportunity to join the great Coyote organization,” said Lamas, a hybrid linebacker/defensive end. “The Coyotes win championships and move players to the next level, and their tradition speaks for itself. I’m excited to now be a part of their family and have the same opportunities. I have a huge motor and a bigger heart, and I’m coming in here to make plays and immediately earn the respect of my new teammates, starting with the Hall of Fame Bowl.”

Working mostly out of the defensive end position, the 21-year-old Lamas led COD in 2012 with six sacks, while recording 43 total tackles, 26 solo, 11.5 for loss, one pass break-up, two forced fumbles and one recovery. He routinely beat outside tackles with leverage, power and speed.

Lamas has big shoes to fill after the Coyotes lost middle linebacker Devin Jones to the NFL’s Houston Texans, and defensive end Devin Howard is now preparing for workouts with the Arena Football League, which might keep him from the Hall of Fame Bowl.

“Lamas is a relentless, disruptive player who can also set the edge against the run,” said Coyotes head coach J. David Miller. “He is an outstanding athlete with an explosive first step who plays low and has great leverage. We also like his versatility to slide inside to three technique.”

Boyle scored 10 defensive touchdowns for the Coyotes this fall to springboard to the Arizona Cardinals, where he is currently working out as an unrestricted free agent. Pervine, meanwhile, led the UFAL champions with 43.5 tackles, with 4.5 sacks and nine tackles for loss.

The Coyotes will make their first AAA Hall of Fame Bowl appearance against a team of U.S. and international All-Stars on January 11 in Palm Desert at 7 p.m.

The game will be played the day after the January 10 AAA Hall of Fame Class of 2013 Induction Awards Dinner. The Coyotes are the host team, and it is the first time the game has been played outside of Las Vegas in 20 years.

The AAA Hall of Fame Bowl will be aired worldwide on KXPS Team 1010 (www.team1010.com) and also simulcast back to Europe via other networks who will broadcast the event.

The Coyotes finished the regular season 7-3, their first in the Southern California Football Alliance, where they played the nation’s toughest schedule.