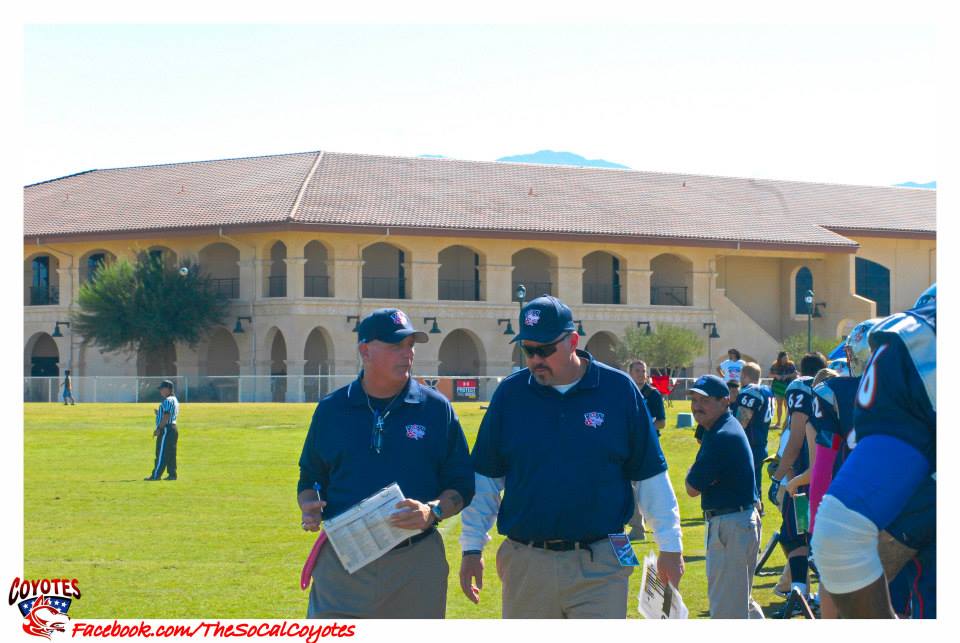 (PALM SPRINGS) — A sign on the wall in the offices of the UFAL Champion SoCal Coyotes reads, “What you do with this opportunity is up to you. Ultimately, we all are measured by results.”

On Monday — for the sixth time this season — the SoCal Coyotes graduated another one of their own to the professional football ranks when the Florida Tide of the upstart National Spring Football League signed Wayne Anderson Jr. as their new offensive coordinator.

The January 11 AAA Hall of Fame Bowl will be Anderson’s last as a Coyote coach before he joins the NSFL, a professional developmental football league playing its inaugural season beginning in the spring of 2014.

Anderson, who lives in Delray Beach, Florida, with his wife Kathryn, commuted the past two seasons to the desert, where he served as the Coyotes assistant head coach and defensive coordinator, and also had plenty of influence on the offensive side of the ball.

His 25 years at the high school, NCAA and pro levels included Florida Atlantic University, Waynesburg University and Edward Waters College. In the professional leagues, Anderson coached in four different countries, and led the Bari (Italy) Patriots to a 2012 division title.

Anderson joins the NSFL, which has 12 inaugural teams spanning coast-to-coast and will work in cooperation with scouts and coaches from the NFL and CFL.

“Wayne practiced what we preach, and he made the most of this opportunity,” said Miller. “He brought discipline to our defense and was a total professional. He prepared every day like it was the Super Bowl.

“We worked seamlessly together and he made us all better. He challenged us as men and leaders. We are extremely happy for Coach Anderson. He’s going to be close to home. No question he will make the Tide a contender, and he will be missed here.”

Meanwhile, the Coyotes have been punished by their own success — losing two players to NFL tryouts, at least three more to arena leagues and now their assistant head coach to the NSFL.

“High-class problems,” smiled Miller. “In 18 months, our program has graduated more players and coaches to the next level than anyone else in Southern California. Our organization is humbled and grateful to have earned that kind of trust and respect. We will uphold that tradition in 2014.”

The SoCal Coyotes are the nation’s only non-profit sports leadership organization to field a professional football team. In only three seasons, the Coyotes have won two league championships and been a national runner-up, and twice have risen to as high as second in national polls.

Mouse Davis, godfather of the Run ‘n’ Shoot and the modern pro offense, will be the keynote speaker at the AAA Hall of Fame Induction ceremonies on January 10 at the Desert Princess. Coach Miller will be among 85 inductees of the Class of 2013.

Davis will join Miller, Anderson and the rest of the Coyotes on their sidelines January 11 for the Hall of Fame Bowl.