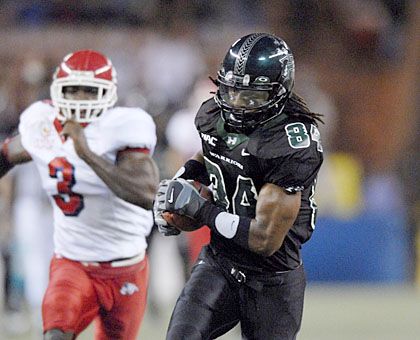 (HONOLULU) — “My road back to the NFL runs through the SoCal Coyotes.”

With those words, former Tennessee Titan and Hawaii wide receiver Jason Rivers – a favorite target of quarterback Colt Brennan for 292 catches,3,919 yards and 35 touchdowns during a record-setting Run ‘n’ Shoot college career – signed today with the UFAL Champion Coyotes and will be in uniform for the team’s January 11 AAA Football Hall of Fame Bowl.

“The SoCal Coyotes are the light at the end of my tunnel back to the NFL,” said the 6-2, 210-pound Rivers. “The Coyotes are a first-class organization with well-documented results of moving players to the next level. They put two players in NFL tryouts this season and more in the Arena league. I’m ready to go full speed and this opportunity is every bit as meaningful as the path I’ve taken to get here.”

Rivers, who signed with the Titans after the Warriors finished 12-0 and played in the 2008 Allstate Sugar Bowl, has several NFL tryouts scheduled for February 2014.

He chose the Coyotes for an opportunity to get AAA Hall of Fame Game reps and film before an international audience in the exact same offense he ran at Hawaii.

Rivers will be reunited with former Hawaii teammates Aaron Kia (tackle) and Dan Kelly (kicker), both of whom enjoyed a stellar comeback 2013 season with the Coyotes.

The night before the HOF Bowl, on January 10, Mouse Davis — the godfather of the Run ‘n’ Shoot and the modern four-wide offense – will be the keynote speaker at the AAA Football Hall of Fame Awards Dinner.

Davis, who authored the Coyotes playbook, has been a pillar of Coach Miller’s career on and off the field. Miller will be inducted into the HOF the same evening.

“I stood next to Coach Miller on the Hawaii sidelines during the 2007 season,” Rivers said. “And the book he wrote with Coach Jones (Hawaii Warrior Football: A Story of Faith, Hope and Redemption) is in every household on the island. That book has had an impact on thousands of people here in Hawaii, and now Coach Miller and I get to write another chapter.”

The Coyotes will play Rivers in the slot, giving quarterback Nate Lewis a huge target up the seam in his already formidable Run ‘n’ Shoot fleet of Rashad “The Franchise” Roberts, Demario Brown, Josh Asuncion, and Wayne Jacobs.

“Thanks to Coach Jones, my football IQ in this offense is pretty high,” smiled Rivers. “Especially the route conversions. I’ve been running this offense since high school.”

“It will be old home week,” joked Miller. “If Jason comes in here and plays as well as Kia and Kelly, I will personally do the haka.”

The haka is a tribal ancestral pre-game dance favored by the Warriors during the June Jones era. In 2013, Dan Kelly was perfect on extra points and 88-percent on field goals, and led the Coyotes in scoring. Kia dominated from his right tackle position while protecting Lewis, and surrendered no sacks.

If Rivers does not sign an NFL or AFL contract, he will remain with the Coyotes through the 2014 season.

“God knows the desires of our hearts,” Rivers said. “If you are praying for something, be prepared to accept what He gives you. This is my opportunity. The Coyotes are champions. I’m coming in humble, to be the best teammate and leader I can be, and help everyone I can while I’m there. I know this is the right path.”