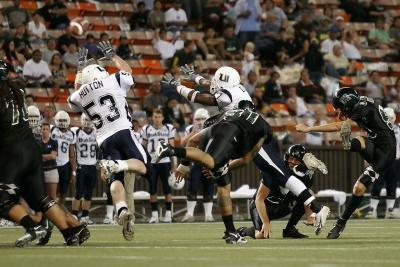 Long-ball Division I kicker Dan “The Ice Man” Kelly, whose cannon shots kept the University of Hawaii’s perfect 12-0 Sugar Bowl-bound season alive in 2007, found himself back in a familiar role today when he signed with the SoCal Coyotes.

Once again, Kelly will kick for a full-throttle Run ‘n’ Shoot team, whose roots can be traced to legendary Hawaii coach June Jones and Mouse Davis, the godfather of the modern passing attack. The Coyotes offense has rolled up 9,366 yards in two seasons, but missed a national championship by a field goal in 2012. The kicking game was erratic at best earlier this spring, after the departure of well-respected veteran Art Cruz.

The Coyotes are 19-4 over two seasons, and field goals would have made the difference in at least two of those games. During recent Coyote OTAs , Kelly thundered kickoffs out of the end zone and hit one-step field goals from 50 yards. Former Coyote kicker Art Cruz even came to meet and congratulate his new replacement, and officially passed the torch.

Kelly is reunited with Coyote head coach J. David Miller, whom he met during the 2007 Hawaii season. At the time, the Coyotes coach was working with long-time friend and mentor June Jones on the best-selling book, “Hawaii Warrior Football: A Story of Faith, Hope and Redemption.” The book chronicled the miracles of the June Jones era, including remarkable stories of players like Davone Bess, Colt Brennan and Pisa Tinoisamoa, who capitalized on second and third chances with life-changing results.

Together, Kelly and Miller get the opportunity to add one more chapter. Kelly — who recently has suffered a spate of off-the-field challenges – asked Miller and the Coyotes for a second chance to rehabilitate his career, and showcase his skills for a shot at the next level. It took a series of meetings last week between the kicker, the coach and Kelly’s attorneys before Miller reached a decision.

“We believe in Dan, and we believe in his faith, his family, and his ability,” said Miller, during today’s announcement. “We acknowledge that we serve a God of second, third and fourth chances. We are all imperfect sinners, saved by grace. We are asking Dan to stare down the barrel of adversity and be an example of true character under fire. The Coyote family will surround Dan with accountability. We accept him as a person first, and believe his kicking will take care of itself.”

“The Coyotes are a first-class organization, and I’m grateful to be given this opportunity to shock the world,” he said. “Coach Miller was with us a lot through that miracle season in 2007, and I trust him now with my career. I’m ready for another miracle. The Coyotes are the only AAA program where I know I can get a legitimate shot to play at the next level. What the Coyotes have built here in the desert is like what we did at Hawaii. Being on the sidelines Saturday, and mingling with my new teammates, I feel totally at home.”

The addition of Kelly now makes the Coyotes a threat to score from anywhere inside the 50. The defense will welcome his touchbacks and the 80-yard cushion they provide. At Hawaii, Kelly played four seasons, and he left behind one of the best kicking resumes in school history.

A two-time Lou Groza Award candidate as the nation’s top kicker, Kelly was a three-time WAC Special Teams Player of the Week. He was named All-WAC as a 2007 junior, setting school single-season records for most PATs attempted and made. He ranks third on the school’s scoring list with 335 points behind Jason Elam (395) and Justin Ayat (368).

Kelly holds career program records with 200 extra point conversions and is third with 45 field goals. He has the fifth (54 yards) and eighth (52 yards) longest field goals in UH history, and kicked in three major bowl games, including the 2008 Allstate Sugar Bowl, where he drained a 41-yard field goal.

“With the Run ‘n’ Shoot, you’re not going to get close field goals,” said Kelly, who has gone from kicking with the NCAA’s leading passer in Colt Brennan, to Nate Lewis, AAA football’s 2012 National Player of the Year. “The Coyotes are like we were at Hawaii. The only time Coach Miller wants to kick field goals is usually fourth-and-very-long. Usually that means we’re going to be backed up, and it’s going to have to be the best I’ve got.”

Miller’s first phone calls after signing Kelly were to June Jones, now the head coach at SMU, and Mouse Davis, the two most influential coaches in his college career.

“When I told my dad that I was going to the Coyotes and Coach Miller, and that God had given me a second chance,” Kelly said, “I know he was fighting back tears. I know everything is at stake here. But if I don’t embrace the pressure and the responsibility, then I’m the wrong guy for this job.”