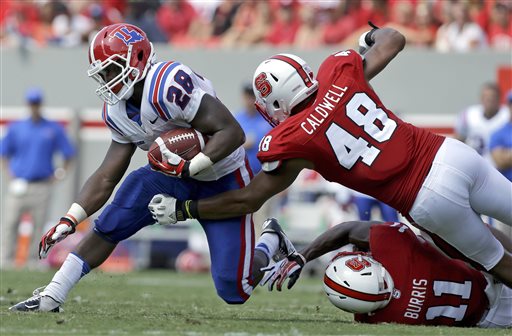 North Carolina State's Robert Caldwell (48) and Juston Burris (11) move in for the tackle against Louisiana Tech's Kenneth Dixon (28) during the second half of an NCAA college football game in Raleigh, N.C., Saturday, Aug. 31, 2013. North Carolina State won 40-14. (AP Photo/Gerry Broome)
(PALM SPRINGS) – When devastating 6-3, 250-pound North Carolina State linebacker Robert Caldwell (48 in photo) – who led the Wolfpack in 2013 with 105 tackles and 15.5 tackles for loss – made it official late this afternoon that he’d signed his contract with the two-time champion SoCal Coyotes, cheering and high-fives broke out among patrons at the Desert Princess Golf & Country Club.Coaches had gathered there to announce the addition of Caldwell, considered one of the nation’s best young linebackers who led all tacklers in the recent College All-Star Bowl. The newest Coyote linebacker arguably makes the 2014 edition of the ‘Darkside Defense’ its most vicious in history.As the Coyotes prepare for their first season in the Professional Spring American Football League, Caldwell joins a roster of stunning blue-chip Division-1 talent and depth at every position. (To view Caldwell’s game film, visit https://www.dropbox.com/s/8cowxvhbwb32hlt/R%20CALDWELL.MP4).

“It’s a tribute to the hard work of all our coaches and staff that players of Robert Caldwell’s caliber continue to choose the SoCal Coyotes program,” said J David Miller, team president and head coach. “Robert can outrun your best player to the perimeter, stuff you between the tackles, or disrupt you as a blitzer.

“He’s a physically and athletically dominant linebacker. We are blessed to have some of the most gifted young players I’ve ever seen in one place. No matter how you scheme us, you’re running into some major problems. And if you’ve seen Robert play, that’s not a problem you want to run into.”

In 2013, Caldwell was North Carolina State’s leading tackler, and his 105 stops were the fifth-most in the Atlantic Coast Conference. His team-high 15.5 tackles for loss in his first season as a starter was the 11th-most in a single season in the NC State record books.

“I’ve heard plenty of good things about Coach Miller and the Coyotes program,” Caldwell said. “I’m excited to come out and be a part of the SoCal Coyotes back in the same community where I played before.”

This will be Caldwell’s second trip to the Coachella Valley, where he first turned heads as one of the country’s best prospects when he played for College of the Desert. The wily Coyotes, meanwhile, have wasted little time reassembling and stock-piling the now-pro talent that the savvy Dean Dowty first assembled at COD three and four seasons ago.

The Coyotes expect to announce three more signings this weekend as it prepares to release its roster and schedule in time for April training camp, which for most players begins April 8.

“The Seahawks just won the Super Bowl with a group of fiercely talented late draft picks and overlooked free agents that all shared the exact same crazed look in their eyes as our young roster,” said Miller.

“This is a hungry group of crazed dogs, and we are going to unleash them on the PSAFL. Our fans can’t wait. We are going to put 11 helmets on the football.”

In 2014, the SoCal Coyotes were selected as one of four teams in the new PSAFL, including Los Angeles, Hattiesburg and St. Petersburg.

In its first season, the PSAFL will play an intense four-game spring schedule with a championship in St. Petersburg. Some of the best talent in the nation will be showcased in competitive games and enjoy game film to market their skills. Fans, meanwhile, will enjoy entertaining spring football from thirsty players fighting for jobs in the NFL, CFL and AFL.

In the fall, the Coyotes will play for a championship in a 10-game schedule in the AAA National Developmental Professional Football League.

The team will play a total of 14 regular season games in 2014 in two different leagues. The Coyotes are the only team in the United States that makes its home and plays its games on a five-star championship golf course, the 27-hole Desert Princess Golf & Country Club.