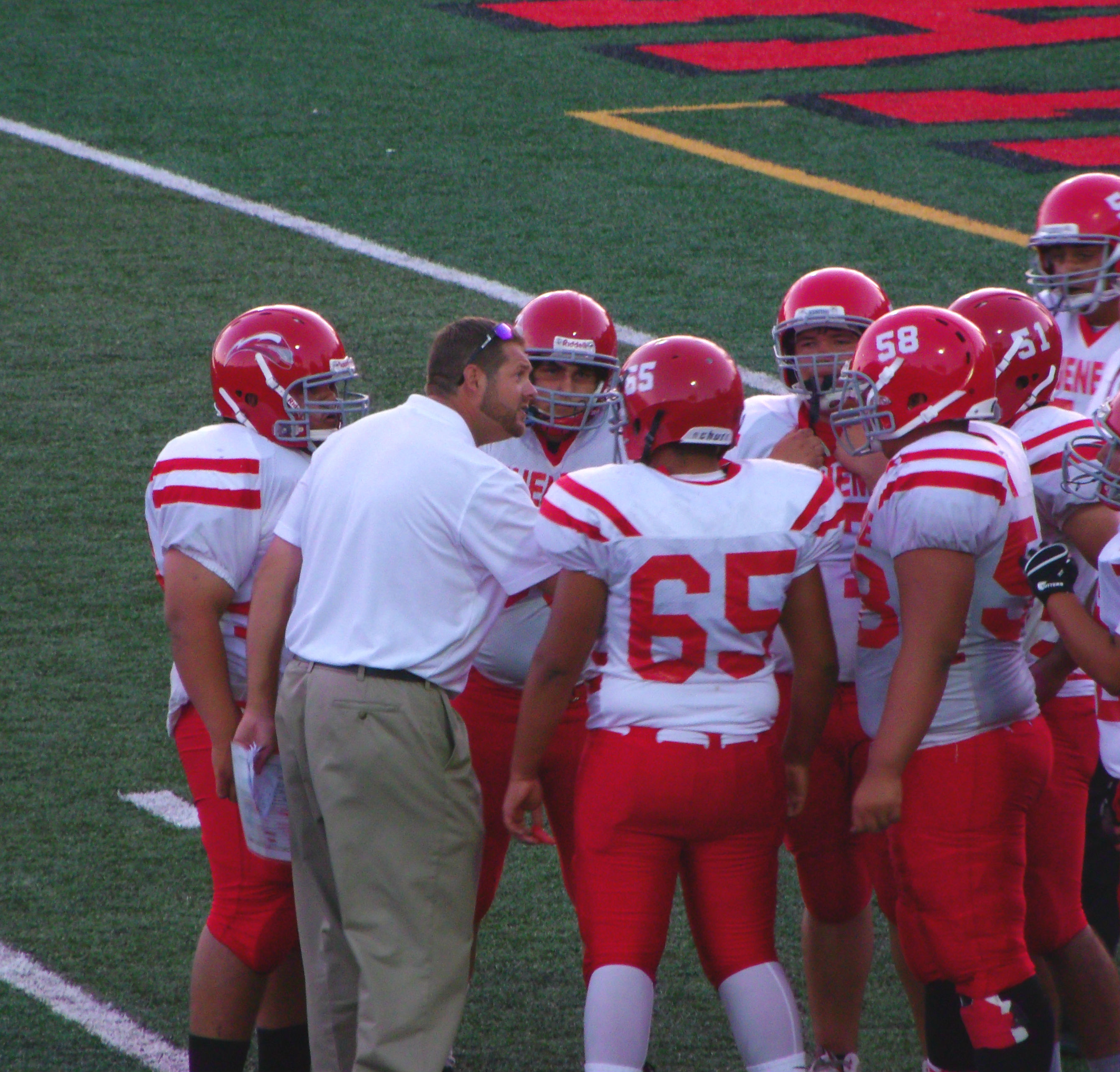 (CATHEDRAL CITY) — Run ‘n’ Shoot disciple Brett Davis, 33, who from 2009-2013 coached Villanova Preparatory and Hueneme High School to their greatest yardage and point productions in history, has joined the SoCal Coyotes as wide receiver and quarterback coach.For the Cal-State Northridge graduate, the Coyotes are his first pro coaching job in an already impressive 12-year career. Davis’s resume includes two different 4,500-yard passers and dozens of individual school records.“Brett is a dynamic young coaching talent,” said Coyotes head coach J David Miller, who made the announcement today at the team’s Desert Princess Golf & Country Club headquarters. “We are in the results business, and Brett can X and O with the best. He’s exciting, and he’s a doer.”

Davis will work under new offensive assistant coach Jeff Rudolph, who along with Coach Miller gives the Coyotes a formidable Run ‘n’ Shoot braintrust. Collectively, they seek to improve on the Coyotes already staggering average Silver Stretch offensive output of nearly 500 yards and 35 points a game.

Davis comes from a distinguished coaching pedigree. His grandfather — Jack Owen Davis — was a team captain at the University of Arizona, played on the original 1960 Denver Broncos, and was a respected high school coach in Arizona and California. His father, Joe Davis, was an All-American quarterback, and led two San Diego State teams to 10-1 records. He, too, was a coach, first at San Diego City College, then Edison High, where he coached Tim McDonald and Icky Woods. He was also a quarterback coach at Northern Arizona.

Among his dad’s teammates at San Diego State were NFL coaches John Fox and Herm Edwards.

“Brett”s been in football all of his life and is well-schooled at being a teacher first, and a coach second,” Miller said. “He is a student of our philosophy, long established by Mouse Davis and June Jones. His quarterbacks, receivers, teams and history speak volumes to his contagious enthusiasm and ability to lead young men.”

Three times Brett Davis-coached quarterbacks broke school career passing records, including six touchdowns in a single game. Davis inherits Nate Lewis, whose 8,957 yards and 90 touchdowns in his last 25 games are the most prolific in AAA history. Lewis has thrown five touchdowns in a game three times.

“It’s not often in our deal you start off with Warren Moon,” smiled Davis. “Nate is an incredible talent. Coach Rudolph and I are excited to help Nate push this offense to epic proportions.” (To see where Lewis stacks up all time against Jim Kelly, Colt Brennan, Warren Moon and other Run ‘n’ Shoot quarterbacks, visit https://en.wikipedia.org/wiki/SoCal_Coyotes).

In 2014, the Coyotes were selected as one of four teams in the new PSAFL, which in its first season will play an intense four-game spring schedule with a championship in St. Petersburg. Top-tier athletes will be showcased in competitive games and enjoy game film to market their skills. Fans, meanwhile, will enjoy entertaining spring football from thirsty players fighting for jobs in the NFL, CFL and AFL.

In the fall, the Coyotes will play for a championship in a 10-game schedule in the AAA National Developmental Professional Football League.

The team will play a total of 14 regular season games in 2014 in two different leagues.

The appointment of Davis demonstrates Coach Miller’s off-season commitment to improving Coyote receivers in their popular Choice, Switch, Slide and Go routes. Rudolph was an original ‘Mouseketeer’ during Mouse Davis’s record-setting, history-making days at Portland State. The addition of Davis means more individual attention to each player, like adding teachers to a classroom.

“Our conversions are the routes,” Miller said. “We need to help Nate audible less by improving our conversions on the run. There is no solution for properly coached Run ‘n’ Shoot receivers. No matter what a defender does, we always hold the chalk last.

“Coyote football is a Mouse Davis, Run ‘n’ Shoot showcase,” Miller said. “Coach Rudolph and Coach Davis are offering the kids who play here an opportunity this valley has never had.”

“If you can’t practice your whole offense in one day then you’re doing too much,” said Davis. “The beauty of the Run ‘n’ Shoot is repetition. We’re going to throw it and throw it and throw it, and that’s just in practice. I’m excited to join this incredible organization. Our goal here is to speed the game up and put great pressure on our opponents.”

This summer, Rudolph will steer the team’s Run ‘n’ Shoot Mouse Davis Football Academy, as well as Pro Passing Camp, and Brett Davis will assist him with both.

Coach Davis is engaged to Katie Stanulis, a former Thousand Oaks High and Ventura College women’s basketball star. The couple is relocating to the desert from Oxnard this week, and Davis will join the Coyotes in time for training camp in April.

“We not only win and score points here,” Miller said, “but we want to be the Run ‘n’ Shoot mecca for coaches and players. Everyone of us owes it to Mouse.”