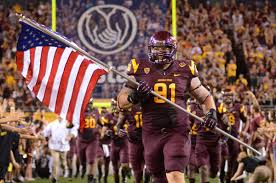 He officially reports for training camp in April to the ‘Darkside Defense,’ where he will play defensive end. Sheffield becomes the eighth signing in two weeks for the Coyotes, who are preparing for a furious four-game schedule in the inaugural Professional Spring American Football League.

“I’m extremely excited to join the Coyote organization,” Sheffield said. “I’m ready to lead this team to another championship and prove this spring I can play and succeed at the very highest level.”

The SoCal Coyotes were selected in 2014 as one of four teams in the new PSAFL, along with Hattiesburg, Los Angeles and St. Petersburg. The championship will be played in Tampa Bay.

Sheffield played in 22 games at Arizona State, including 13 his senior year in 2013. He credits his tremendous discipline and work ethic from time spent with the United States Marines, which included two tours of duty to Iraq.

“He is respected by every coach, player, teammate and soldier he’s ever been around. Jake is a big-time player. He’s explosive off the ball. He can play tackle or end. His presence alone blows up offenses and creates opportunity for every player around him.”

Certainly, Sheffield is no stranger to blowing things up.

At the age of 18, Sheffield was assigned to Golf Battery, 2nd Battalion, 11th Marines. For four years and two tours in Iraq, his mission was threefold. First, his job was to carry and load the 120-pound, 155-millimeter rounds for the artillery cannons.

His unit would also provide convoy cover for Iraqi soldiers just out of boot camp. But the most daunting and dangerous assignment was to provide protection for the ordnance disposal unit. Sheffield risked his life looking for bombs, and could have been killed — like the time an IED shredded through the engine block of his Humvee.

He took advantage of his second chance at Arizona State, where he is now completing his master’s degree. The PSAFL offers another shot at the bright lights of the NFL.

Sheffield starred for Dean Dowty at College of the Desert, and joined ASU ain 2012 as one of the top junior college prospects in the nation.

In the PSAFL, Sheffield joins other combine-quality athletes who will be showcased in competitive games. Players will enjoy game film to market their skills. Fans, meanwhile, will enjoy entertaining spring football from thirsty players fighting for jobs in the NFL, CFL and AFL.

Later this fall, the Coyotes will battle for a championship in a 10-game schedule in the AAA National Developmental Professional Football League.

The Coyotes are dedicated to “changing the culture” of professional football through player mentoring and development, organizational management and dynamic service to their community.

The team will play a total of 14 regular season games in 2014 in two different leagues.