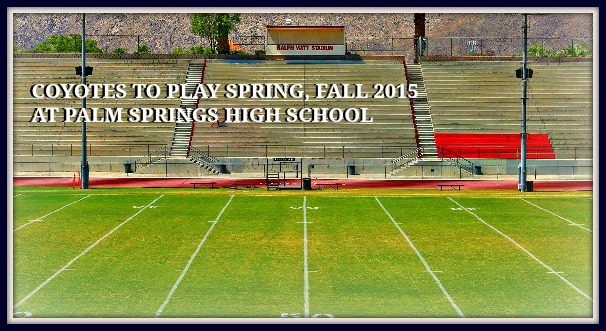 The two-time champion SoCal Coyotes have been cleared to play seasons six and seven at Palm Springs High School, signaling a return to the desert for the Coachella Valley’s oldest and winningest professional football franchise.

Palm Springs High School Athletic Director Dennis Zink confirmed this morning that paperwork was approved and the Coyotes were cleared to play both spring and fall 2015 seasons in the soon-to-be-announced AAA Professional Football League.

“For our fans, this is the biggest day in franchise history,” said head coach J David Miller. “The SoCal Coyotes humbly thank Mr. Zink and Palm Springs High School for the opportunity to put our great players back on the field, in the heart of the City of Palm Springs, where we are based, and where we belong.”

The Coyotes will play their first game at Palm Springs High School April 11, but team officials were tight-lipped regarding any further details.

The AAA Professional Football League, based in Irvine, has scheduled a joint press conference for February 18 at The Palm Springs Hotel with the Coyotes, who are expected to be announced as the league’s flagship franchise.

The APFL is expected to unveil a historic, groundbreaking developmental professional football platform that not only compensates its players, but also provides insurance, mentoring, employment, and more.

It will be the Coyotes biggest leap in franchise history, affirming again the team’s steadfast commitment to “building champions by building men.”

The Coyotes, the nation’s only non-profit sports leadership organization to field a professional football team, is fast becoming recognized industry-wide for its efforts. The team has donated thousands of dollars to area schools, youth organizations and charities, and distributed its leadership curriculum to more than 30,000 students.

PALM SPRINGS LIKES MIKE — Playing at Palm Springs High School will be a homecoming for record-setting quarterback Michael Karls, who led PSHS to its first CIF championship in 70 years in 2009. After writing his name in the record books at Midland University, Karls joined the Coyotes after graduation in 2014 and promptly set nine franchise records as a rookie. Running the Coyotes vaunted Run ‘n’ Shoot offense, Karls had seven consecutive 300-yard games. At Palm Springs High School, Karls was the Indians’ Most Valuable Player, Eastern Division CIF Offensive Player of the Year, and named by The Desert Sun as ‘Friday Night Hero’ three times.

SOCAL COYOTES IN 2014, OVERALL — The SoCal Coyotes finished calendar 2014 with an 11-2 record, and were LCFL Western Conference champions. Playing back-to-back, spring-fall seasons since March 2012, the team has compiled a record of 42-10.

No Coachella Valley football team at any level has won 42 games in less than 36 months, a Coyotes feat that will be difficult to match because of seasonal play.

THANKS TO ANZA’S HAMILTON HIGH SCHOOL — The Coyotes played fall 2014 at Hamilton High School, 33 miles from downtown Palm Springs in the Anza mountains. The team went undefeated at home, outscoring opponents 262-83. During their stay, the Coyotes donated over $1,000 to the school’s football program and senior class.