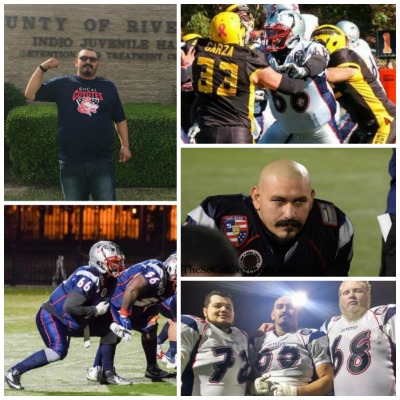 That was the message hammered home recently during a ‘Real Men Read’ session at the Riverside County Juvenile Hall in Indio, when SoCal Coyotes star veteran left tackle Johnathan Zazueta challenged and encouraged a class of young offenders.

“You can’t change your past,” Zazueta said, “but you can decide your destiny. You gotta start sometime, so why not now? Leaving here, and never coming back, must become your number-one priority in life.”

Like UFC fighter Cub Swanson, who grew up in the Coachella Valley and spent time in juvenile hall before he turned his life around, Zazueta understands.

A dozen years ago, he found himself at Juvenile Hall for far, far different reasons. Like so many other Indio teenagers – he wound up in the wrong place, with wrong friends, in the wrong crowd, at the wrong time. But a message of hope, delivered by his grandmother and mother, turned his life around.

“They said, ‘read your Bible – there’s a calling on your life,'” Zazueta shared. “I couldn’t run away from it. I made a decision that day. Each day I step toward being a man that God, my people, my community, my mother, my grandmother can admire and respect.”

“He’s exactly what we teach the kids,” Tripp said. “There can be success when you leave here. This is what it looks like. It looks like Jonathan.”

Today Zazueta works with some of the valley’s most trusted contractors, doesn’t drink or smoke, is married and raising three children, is a mainstay in his local church, and an ‘Above the Line’ team captain of the Coyotes.

Now in his 10th Coyote season, Zazueta has been a fixture in a Silver Stretch attack that has led six different leagues in total offense. Each year, heralded 20-something rookies from major universities flow through the Coyote program, but none have been able to threaten his job.

“Johnathan is a total pro on the field,” agrees head coach J David Miller. “Off the field, he’s an amazing father, works hard, serves our community, loves the Lord and changes lives. That’s the definition of a Kingdom man.”