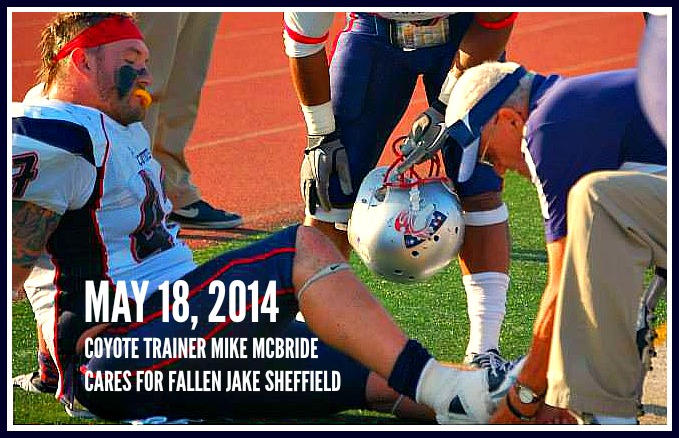 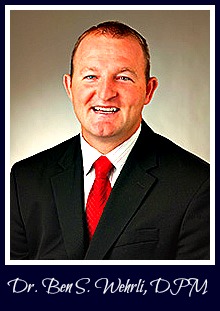 (PALM SPRINGS) – It takes one to know one.

Dr. Wehrli played major-college baseball on scholarship at BYU and Idaho, after lettering in wrestling, baseball and football during a star high-school career that earned him “U.S. Marine Corp Athlete of the Year” his senior season. It was a bittersweet day when the crossroads of reality ended his playing days, and he turned his full-time focus to medicine.

The Coyotes announced today that Dr. Wehrli will return this fall for his fourth season, covering the team along with Director of Sports Medicine Sydney Pardino, also a prominent Desert Regional physician who holds the same position at ICON.

“The best single word to describe Dr. Wehrli is ‘passion’,” says head coach J David Miller. “We admire his passion for the Lord, for ministry, for family, for medicine, for athletes, for giving, passion to create something from nothing. We preach to our players – embrace passionate people, because their influence never stops. Dr. Wehrli does far more than help the hurting. He’s a harbinger of hope.”

Dr. Wehrli performed his undergraduate studies at Idaho State University in Microbiology, with emphasis in Medical Technology. He then earned his Doctor of Podiatric Medicine at Des Moines University. Following medical school, he did residency training at the renowned Detroit Medical Center-Wayne State University, one of the nation’s elite foot and ankle surgical residency programs.

Dating to his earliest days in medical school, Dr. Wehrli tightly wove sports into the fabric of his future. He was president of the sports medicine club that offered assistance to the local high school teams in Des Moines, as well as Drake University. While in Idaho, he spent a summer as a volunteer assistant coach of the Idaho Falls Reds, a prominent American Legion baseball team.

In Residency at Detroit Medical Center-Wayne State University, he not only covered, but also coached at nearby Madison High School. Dr. Wehrli fondly recalls his ‘mini’ sports fellowship through his residency with Dr. Stephen Lemos and Dr. Douglas Plagens, who covered Major League Baseball’s Detroit Tigers, the NBA’s Detroit Pistons, and the NHL’s Detroit Red Wings.

A man consumed with his mission never goes unnoticed. Dr. Wehrli’s rising medical star was matched only by his stellar community service, which caught the attention of Animas Orthopedic Associates in Durango, Colorado, who recruited him. During his tenure there, he wasted no time becoming the team physician for Bayfield High School. Always a pioneer, it was then “we were able to start a growing sports medicine practice with two of our Steadman Hawkins Sports Medicine fellows,” Dr. Wehrli says. “We performed minimally invasive sports medicine procedures, and spent time in Naples (Florida) perfecting these techniques.”

Since relocating to the desert, Dr. Wehrli’s signature has been his expertise in the revolutionary arthroscopic Brostrom-Gould procedure, for recurrent ankle sprains due to torn lateral ankle ligaments. Today he teaches labs and gives national lectures on the subject. His own techniques have earned him personal acclaim, including the attention of Stryker, a worldwide leader in orthopedic medical technology. There he consults in the STAR program, educating surgeons on how to perform these procedures, while also consulting with Aspen Leaf Education LLC, and directing Coachella Valley Foot and Ankle alongside business partner Aaron Bean.

Dr. Wehrli joined the ICON sports medicine program at its inception. In addition to the Coyotes, he also has been a team physician for Shadow Hills High School the last three years. “I am passionate about sports,” Dr. Wehrli says. “ It’s been a major part of my life and always will be. Athletics teaches life lessons about hard work, dedication and teamwork, at the most impressionable times. It puts diverse people with diverse backgrounds on a level playing field, with no social, racial or economical advantage.”

A man of action not given to blustery self-promotion, Dr. Wehrli quietly spends his free time at church on Sundays and Wednesdays, teaching men ages 12-17. At home, he and bride Casie lead an exuberant household punctuated by the laughter of children Braxton, Brinley, Brielle and Brennen. “My love for the Lord,” he grins, “and the joy I share with my family, keep me at full power. We trust the path God has for us.”

If you ask Jake Sheffield, Dr. Wehrli was heaven-sent, faith-family-football personified. The Coyotes superstar NFL defensive end prospect from Arizona State faced an uncertain future after a debilitating foot injury last May. A flawless surgery from Dr. Wehrli put him back in the pack, where he led the Coyotes defensive drive to a league title game last fall.

“My career was in his hands,” says Sheffield. “He took it personal, from surgery to recovery. When men like Dr. Wehrli care that much about you, it’s humbling. He’s been there as an athlete, and there’s mutual trust.

“Dr. Wehrli knows exactly what it means when an athlete simply says, ‘Thanks, Doc.’”

The Coyotes open at their new Palm Springs High School home April 11 against the California Sharks, in the debut of the AAA Professional Football League. 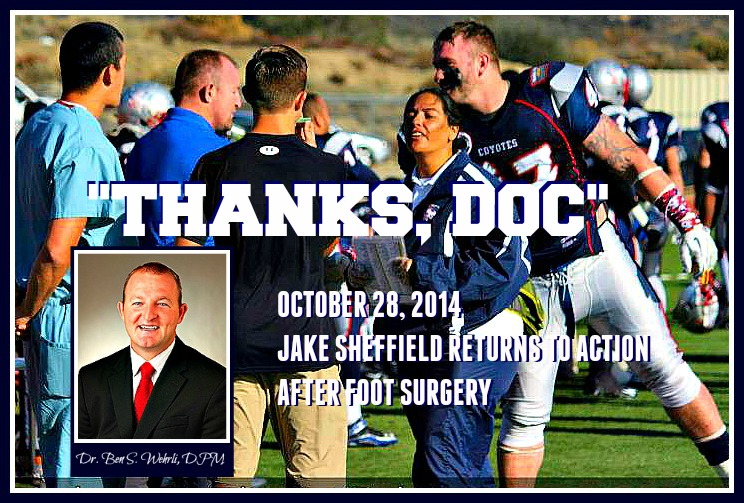