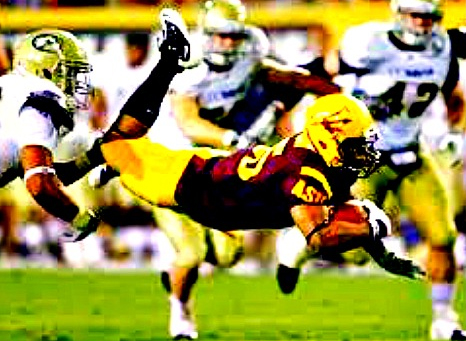 (PALM SPRINGS) – When 5-10, 200-pound Arizona State running back Rj Robinson signed his SoCal Coyotes contract this afternoon, he brought not only a dazzling 4.8 yards-per-carry average over his 19 Division I games, but also became the APFL’s first Pac-12 All-American Student-Athlete, whose perennial 4.0 GPA became the highest cumulative student body GPA in school history.

“We are reasonably optimistic he’ll learn our offense quickly,” quipped Coyotes head coach J David Miller, when the team announced that Robinson, a pre-med student who has his Bachelor of Science degree in Kinesiology, had officially joined a three-way fight to win the Coyotes coveted S-back position in the team’s feared Run ‘n’ Shoot ‘Silver Stretch’ offense.

Described by former Arizona State coach Dennis Erickson as an “Old Warrior,” Robinson is elusive and well-balanced, with break-away speed. At a 2014 regional NFL Combine, scouts liked Robinson’s 4.43 speed, and he was touted for his “patience in setting blocks, smooth footwork, ability to throttle down, change direction and wait for plays to develop.”

A proud alumni of the 38-33 victory over UCLA that gave the Sun Devils a Pac-12 championship, Robinson also played in the Kraft Fight Hunger Bowl victory over Navy. He plans to attack the AAA Professional Football League with the same fervor that has repeatedly carried him to the top of his class, both on and off the field.

“Growing up without much has taught me that hard work is the only thing a person can afford,” says Robinson. He credits parents Randy and Tara, his older sister Ralaina, and younger brother Tecory, as “the team that fueled my dream.”

Robinson went to ASU as a walk-on, merely hoping to secure an affordable in-state academic future. Once there, great character, strong work ethic and “the will to never give up” turned him into a special athlete, fan favorite and respected teammate.

“There’s something to be said for having a good sense of humor, living a clean, positive life — and believing in yourself,” he smiles. “Those are key ingredients at finding success in every area of your life.”

Robinson points to the Coyotes mantra of “faith, family and football” as a deciding factor in his decision to continue his football career in Palm Springs.

“Trusting the Lord every step along my life’s journey has been a blessing,” he says. “I’ve been rewarded through meeting great men, great women and great children of God. I’m ready to use whatever platform God gives me to make a difference in the lives of others.

“I’m excited to get involved in the community and outreach to the middle schools,” he adds. “When you positively influence the life of a child, you are tied to their destiny. That’s when you discover that things just don’t happen by chance.”

The Coyotes open at their new Palm Springs High School home April 11 against the California Sharks, in the debut of the AAA Professional Football League.

The APFL ‘Builds Champions by Building Men’ through employment and leadership opportunities, challenging its players to ‘Be Paid, Be Insured, Be Discovered – and Be a Man.’