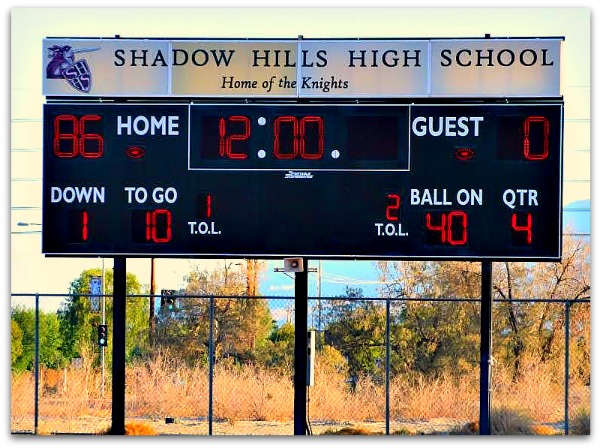 (INDIO) – With desert temperatures sizzling Sunday at 110 degrees, All-American rookie quarterback Jacob Russell completed 17 of 19 passes for 342 yards and seven touchdowns and running back Dylan Peebles rushed 11 times for 157 yards and three scores to lead the four-time champion SoCal Coyotes to an 86-0 basting of the visiting Chino Eagles.

All-American slotback Jarrod Harrington continued his all-purpose assault, scoring four times from every direction, including a dazzling punt return nearly the length of the field. Wide receiver Chad Ward Jr. had a pair of touchdowns and a team high 91 yards receiving, while Rashad ‘The Franchise’ Roberts hauled in one score.

On the day, the Eagles ran 31 plays for a final total of minus one yard.

The heat cooked the Eagles, who – down 40-0 – set an SCFL record by invoking the ‘mercy rule’ only three minutes into the second quarter, demanding a running clock for the rest of the game. The undefeated Coyotes (4-0), conditioned to three-digit temperatures since their even-hotter August two-a-days, obliged with an auto-pilot, day-at-the-office whitewash to stay atop the Southern California Football League.

The Coyotes, who have outscored opponents 276-10, will have all hands on deck for the October 1 showdown with the Vegas Trojans, the SCFL’s only other undefeated team. Kickoff is set for 7:30 p.m. at Indio’s Ed White Stadium.

In four games, only one team – the San Diego Nighthawks – have positive yards against the Coyotes. The Central Coast Seminoles, California Raiders and now Chino Eagles failed to net a single positive yard against a vicious young Darkside Defense that Coyote coaches say still “hasn’t peaked.”