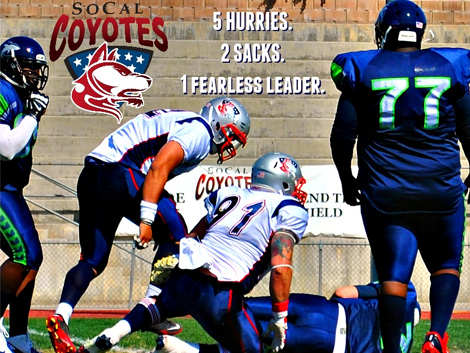 (PALM SPRINGS) — For the SoCal Coyotes (1-0), their nail-biting 21-19 APFL Week One win truly came down to the proverbial ‘game of inches.’

California Sharks record-setting quarterback Joe Clancy barely missed on three long touchdowns. A goal-line pass for a two-point conversion in the game’s final minute – that would have tied the game – was just off the mark.

But the cause of those rushed throws? Relentless pressure from the ‘Darkside Defense,’ led by none other than Arizona State NFL DE prospect Jake Sheffield.

The ‘Darkside’ also claimed an interception by Dominyck Miller which he returned for 23 yards.

As a national sports management opportunity for developmental players, coaches, and administration, with a single governing body, and league-wide transparency, efficacy and parity, the APFL is the nation’s fastest-growing AAA football franchise opportunity.