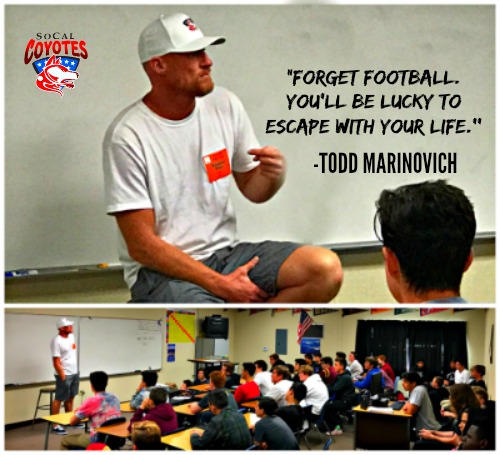 From the 2008 class alone, there have been 23 opioid-related deaths.

Marinovich shared his own cautionary tale, wherein drug abuse derailed his brilliant NFL, CFL and Arena career after he was a first-round draft pick of the Los Angeles Raiders. The 90-minute session included powerful question-and-answer rapport, during which Marinovich pulled no punches.

“Forget football,” Marinovich said. “You’ll be lucky to escape with your life.”

At one time, Marinovich was just as promising to the NFL as the pristine Darnold – had Marinovich chosen better friends, and never slipped into drug dependence.

The elder Darnold works in student services for the City of Dana Point and Dana Hills High School, which includes solutions to parents and youth to stem the rapidly growing drug epidemic.

Currently Marinovich is preparing Coyote quarterbacks in the Run ‘n’ Shoot offense for their inaugural season in the World Developmental Football League, which will open August 26.

The SoCal Coyotes went undefeated in 2016 for the second time in nine seasons. The most dominant sports brand in Coachella Valley history with nearly 15,000 Facebook likes and followers, the Coyotes are 73-13 lifetime, with four championships since 2012 and a 20-game fall win streak that dates back to 2015.

The Coyotes enjoy a broad array of powerful corporate partners, including the City of Indio – home of Coachella, the nation’s largest outdoor music festival. Indio Councilman Glenn Miller and California State Senator Jeff Stone are vocal Coyote advocates, and their vision of an Indio sports complex includes a new permanent home for the Coyotes.