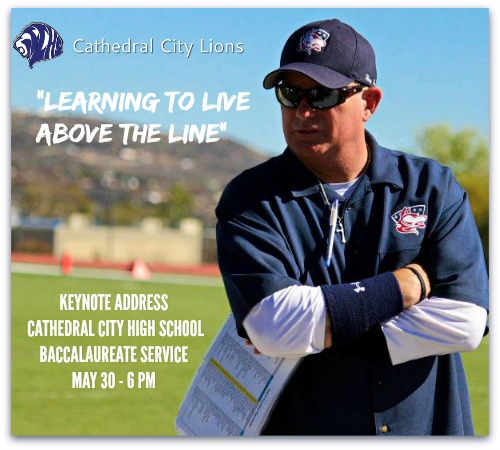 (CATHEDRAL CITY) –  SoCal Coyotes head coach J David Miller has accepted the invitation of Cathedral City High School Athletic Director Todd Diliberto to speak at the school’s Baccalaureate Service for graduating seniors and their families on May 30 at 6 p.m.

Coach Miller will challenge seniors to “Live a Life Above the Line” – driven, skillful, intentional and on-purpose.

Sustained excellence is a career staple for the Hall of Fame coach, best-selling author, producer and award-winning marketing and communications strategist.

The Coyotes are the Coachella Valley’s most dominant sports brand in history, with nearly 15,000 Facebook followers, 2 undefeated seasons, 6 title appearances and 4 championships since 2012. In 2013, the AAA Football Hall of Fame made Miller a unanimous selection for his “ongoing 30-year contribution as an author, administrator and coach.”

A recipient of the New York Newspaper Guild’s Page One Award for Journalism Excellence, Miller is widely known for his 13 books, which include collaborations with numerous NFL coaches and players, notably the iconic Jerry Glanville and NFL Hall of Famer and Super Bowl champion Hank Stram. Others include “Third and Long” with former Cardinals’ All-Pro QB Neil Lomax, and “Hawaii Warrior Football: A Story of Faith, Hope and Redemption,” with former Hawaii and SMU head coach June Jones.

The SoCal Coyotes went undefeated in 2016 for the second time in nine seasons. The Coyotes are 73-13 lifetime, with a 20-game fall win streak that dates back to 2015. Across his entire career, Miller is 122-23.