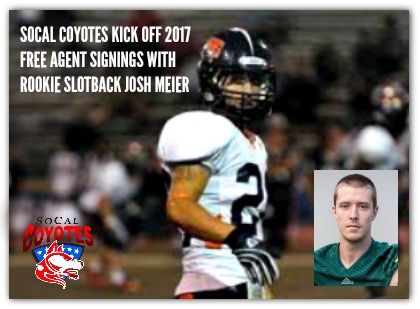 (INDIO) – A long-shot CFL prospect who caught the attention of scouts last fall became the first rookie free-agent signing of 2017 for the SoCal Coyotes, who will anchor the Pacific Coast Division of the World Developmental Football League later this year.

He described Meier as “very fast and very smart, who now has a chance to prove it.”

“The best place in the country to grow as a player and a man is the SoCal Coyotes,” Meier said. “It’s an honor to ‘Defend the Shield’ and follow in the footsteps of the great players and traditions of Coyote football.”

At Reedley (junior) College, Meier played corner, running back and wide receiver.Speed has been his calling card since Meier was a two-sport star at Buchanan High in Clovis. He broke state records three times in the 4x100m relays, and won conference titles and also set marks in the 200m.

Since 2013, the Coyotes have developed a pipeline of prospects from the Clovis-Fresno area, including running back Nigel Simmons, quarterback Taylor Genuser, defensive end Kelvin Cain, and defensive back Billy Wright.

Meier joins a Coyote franchise that has lost only one fall game since 2014.

COYOTE SIGNINGS – Before the NFL draft, the Coyotes are expected to offer contracts to nearly two dozen returning veterans, including team captains. After April 27, the team will make room for as many as 20 more rookies high on their board who go undrafted.

ABOVE THE LINE – New Coyotes can expect the nation’s strictest Code of Conduct and Social Media Policy. Required to work, they will join the ranks of the Coyotes throughout the Coachella Valley who enjoy gainful employment with sustainable incomes. All Coyotes are required to volunteer as community servants.

‘Above the Line’ standards are enforced by team captains, which requires a Coyote to act, believe and behave in a manner that is ‘skillful, intentional and on purpose.’

APPLE AND A BUS TICKET – Blaming, complaining, excuses – all considered by the Coyotes as compulsive/impulsive ‘below the line’ behavior, does have one perk, says assistant coach Mike McBride. “You’ll get an apple and a bus ticket home,” growls the veteran coach, back for his eighth Coyote season.

DISCOVER how The Pro Football Educator, operated by former Denver Broncos GM and two-time Super Bowl winner Ted Sundquist, selected the SoCal Coyotes as America’s #1 Developmental Pro Football Program™.  Faith, family, football is the real mission of the Coyotes – and not surprisingly, something that dates back to the great Vince Lombardi in 1959. The Coyote mission of Building Champions, Building Men™ reaches deep into the development of young athletes as fathers, husbands, and men.