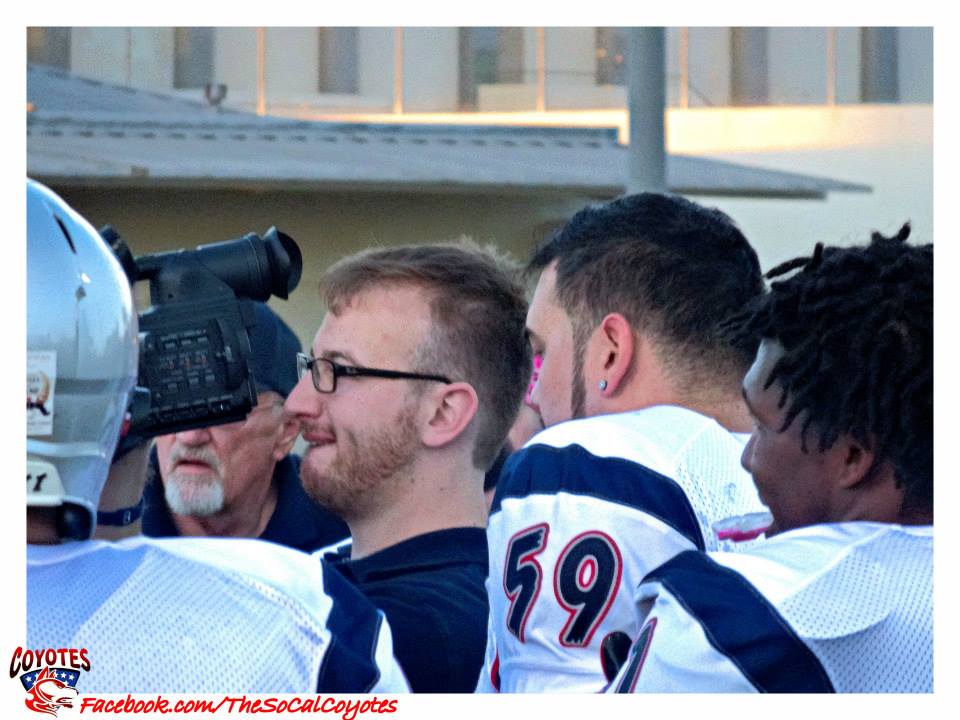 (PALM SPRINGS) — Coyote TV director and filmmaker Spencer Lee became the latest member of the SoCal Coyotes non-profit sports leadership organization to slingshot to the next level today when he was hired by the Los Angeles KISS of the Arena Football League.

Lee officially becomes the first video coordinator in the short history of the KISS, scheduled to begin play next month for the 2014 season. Based in Los Angeles, the team plays its home games at the Honda Center in nearby Anaheim, which they share with the Anaheim Ducks of the National Hockey League. He was personally hired by Bob McMillen, the 2013 AFL Coach of the Year, and the KISS franchise’s first head coach.

Lee has directed and produced a powerful portfolio of short films, but his sports work came under intense scrutiny with the success of Coyote TV — and as the SoCal Coyotes became a revolving door of big-league talent in 2013, with two players leaving for the NFL and eight more for an array of Arena and indoor teams.

“Spencer did this on his own,” said SoCal Coyotes president and head coach J David Miller. “He deserves all the credit. Opportunity knocked, but Spencer Lee kicked down the door and grabbed it by the throat. For the KISS to hire him is a tribute to his extraordinary talent and affirms how hard he’s worked here.”

It’s also a standing ovation to the Coyotes, and the opportunities they provide every player and professional within their organization. The Coyotes place an enormous premium on verifiable data, which begins with broadcast-quality, high-definition game film — allowing the team to attract the nation’s best talent who need film and high-level game experience to advance.

Lee never hesitated when the Coyotes offered him the chance to write his own resume.

“I would like to say thank you to all of the SoCal Coyotes, and the guidance and vision of Coach Miller for helping me get where I am today,” said Lee, who last weekend wrapped filming of the AAA Football Hall of Fame Awards and Bowl at the Desert Princess Golf & Country Club and Desert Princess Palm Springs Golf Resort.

“I had no idea when I began working with Coach, the Coyotes — and on the ‘Mouse that Roars’ movie — how fast it would improve my skills, my faith and my opportunities.

“The Coyotes are creating huge opportunities, and frankly, they let you eat what you kill. It has been an honor to serve the Coyote organization throughout the 2013 season, and when the KISS season ends in July, I’ll be back to ‘Coyote Up’ in 2014.”

Lee, who hails from the tiny town of Wynot, Nebraska, has worked his way into the bright lights of tinsel town. Prior to the Coyotes, Lee was a sports videographer with the Santa Monica Mirror, and freelance videographer with art galleries, red-carpet events, Los Angeles theaters and high school teams.

Clearly, his star is rising. Lee is also the executive director of ‘The Mouse that Roars’ a full-length feature sports documentary on the life of Darrel “Mouse” Davis, godfather of the Run ‘n’ Shoot and modern pro offense.

Lee joins new KISS quarterback Colt Brennan, one of the most prolific Run ‘n’ Shoot quarterbacks in NCAA history. Brennan was coached by June Jones and Mouse Davis at the University of Hawaii, and also appears in the movie with other notable coaches and quarterbacks such as Jones and NFL Hall of Famer Jim Kelly.

Mouse Davis was the ground-floor director of operations for the Arena Football League in 1987, and hired the league’s original coaches under founder Jim Foster. Thirty years later, the same young film-maker who is making Davis’s movie is now an Arena Football League hire, a point not lost on Lee.

“Coach Miller teaches that the size of your opportunities look strangely similar to the talent of the people you choose to follow,” said Lee. “He demands measurable results, every day, and that’s prepared me for the AFL. I’ve quickly learned that football is a small world.

“To be honest, it’s surreal. In the past two weeks, I’ve been standing on the same set with Mouse Davis, and now I’ve been hired in the league he helped start. Mouse has been absolutely incredible. The best way to describe Mouse is famously humble. He is an amazing man.”

Lee’s appointment is a win-win from Los Angeles to the Coachella Valley. There is no downside for the Coyotes, who after the Arena season will have Lee back full-time by training camp.

“I guess Spencer Lee has answered any questions about the quality of our film,” smiled Miller. “The lifeblood of a player’s future is his film, the integrity of who they play for, and who is distributing their film. We are excited to see his work for the KISS.”

KISS is notable for its ownership by the legendary rock band, as well as their manager Doc McGhee. In addition to the team being named after the band, season-ticket holders will be invited to a free concert by the band to take place at the Honda Center in 2014.

Lee can’t wait to get started.

“Ever since I found out about the LA Kiss coming to town, I wanted this gig,” he said. “I knew I could bring professional film to their coaches and players. It takes a lot of hard work and passion to do this job, and, honestly, that’s what I love to do. Filming players in the moment of battle is almost as exciting as being out there myself, especially when the shot is perfect. Add the perfect shot to the spectacle of KISS, and you’ve got magic. I can’t even express my excitement for this opportunity.”