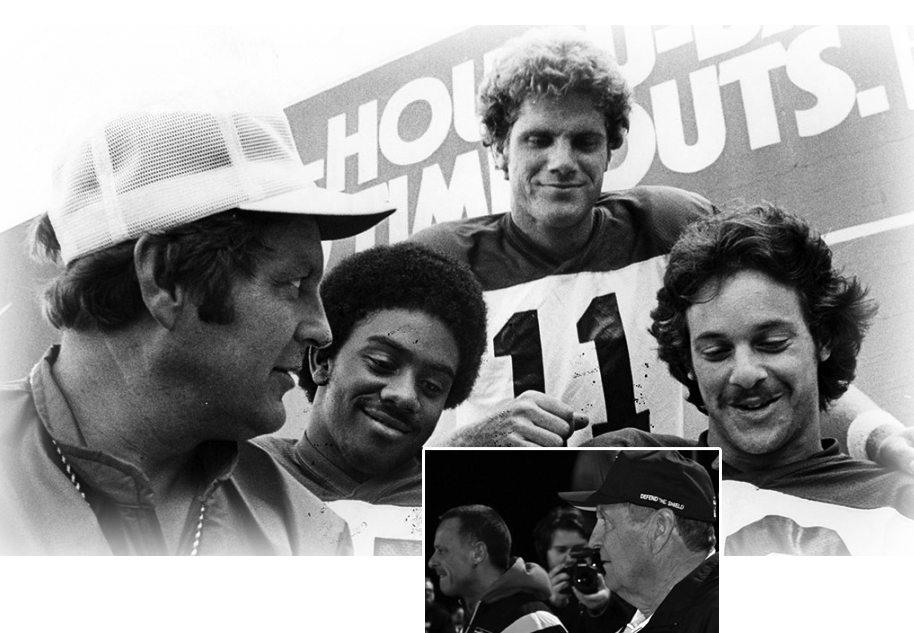 Davis is the godfather of the Run ‘n’ Shoot and modern pro offense, and has long been a mentor of Coyotes head coach J David Miller. Rudolph, who moved to the desert two months ago, was an original Davis-coached slotback at Portland State –with future NFL quarterback Neil Lomax and receiver Clint Didier – on teams that set 42 NCAA records.

Rudolph brings two decades of coaching experience to the Coyotes, specifically his expertise as a director of the renowned Portland-based Barton Football Academy, whose alumni include current Green Bay Packers quarterback Aaron Rodgers.

“Jeff has been playing and coaching in our offense since Mouse drew it up, which is like getting the tablets directly from Moses,” said Coyotes head coach J David Miller. “Jeff’s experience with Coach Barton in Portland is invaluable in the upcoming launch of our own football camps.”

The Coyotes will have at least two camps in 2014, both held at the Desert Princess Golf & Country Club.

“It’s an honor and privilege to be a part of the SoCal Coyotes family and to host such a great passing academy,” said GM Brandon O’Neill of the Desert Princess. “We truly believe in what the Coyotes are doing for the young men of Coachella Valley. We can’t wait to get started with the first camp.”

Miller said the Coyotes’ inaugural Mouse Davis Football Academy camps will closely resemble those of Barton’s, “except with more emphasis on the passing game, of course.” The Coyotes are preparing a football curriculum for desert youth ages 8-18 that includes D-1, NFL and Arena coaches and players, with a variety of passing camps and all-star games.

“The Coyotes are now in year four of our five-year business model,” Miller said. “2014 will see us give Coachella Valley youth year-round access to train and hone their skills at the highest level, with the best coaches.

“Our camps are going to be all about running, throwing and catching the football, and we will bring together some of the best coaching minds to tutor players from the 8th grade up. Even players who have already made their college choices will have the opportunity to get instruction and to fine-tune their games before they head to college in the fall.”

Meanwhile, Rudolph will continue polishing the Coyotes offense, which already averages 400 yards every time they step on the field. While returning superstars Demario “The President” Brown and Rashad “The Franchise” Roberts routinely break 100 yards a game, Miller is demanding more production from the slot positions, a Rudolph specialty.

“We need to get another 100 yards a game out of the slot position, and average at least 100 rushing,” Miller said.

Rudolph, no stranger to great quarterbacks, hopes to streamline receiver route-conversions for franchise quarterback Nate Lewis, currently among the most prolific signal-callers in AAA history. Lewis has thrown for 8,957 yards and 90 touchdowns in his last 25 games.

“I’m excited to tighten up the offense and do what we can to help Nate get the ball out even quicker,” said Rudolph, whose father Robert played for the Oregon Ducks, while older brother Steve played for Oregon State. “It’s a great feeling to be a part of what the Coyotes are doing, and to join Coach Miller’s dynamic organization. This feels like home. We’re all a part of the Mouse Davis family.”

Mouse, Rudolph and Miller recently shared laughs and memories while preparing for the AAA Hall of Fame all-star game. While Rudolph was on the receiving end of many Lomax passes, Miller co-authored the quarterback’s book, “Third and Long.” Lomax once held 90 NCAA records, including seven touchdowns in a single quarter.

“It’s a blessing,” said Miller. “Football is a small world. It’s all come full circle. We are proud to be Mouse Davis fed, now Coyote bred.”