Home Archived Posts How the Coyotes run the Choice 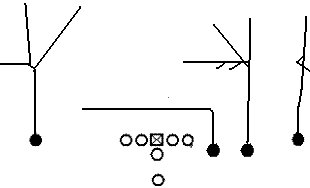 The Choice Route is probably the most recognizable element of the Coyotes Run ‘n’ Shoot offense. This route gives the receiver the option of  a true “read” route: it was all done on the fly. The QB and receiver have to be on the same page, and when they are, they are confident they can complete this pass whenever they want.

The base route in the choice concept is the out — the receiver wants to sell that he is going deep and then to break to the sideline. If done correctly, it is difficult to defend this route. For the speed out, the receiver will burst upfield for six steps, and then roll on his seventh and eighth steps to the sideline, driving his outside elbow to turn his body around. He then flattens to the sideline and expect the ball at about twelve yards.  The comeback works how you’d expect — sell deep then break down at fourteen to fifteen yards to the sideline to a depth of about twelve.

Veteran Coyote receivers are smart enough to “run competitively to space,” or open areas, but they run to space from designed routes.