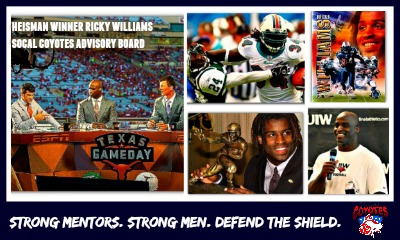 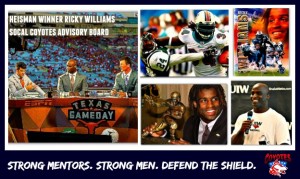 (PALM SPRINGS) – Heisman Trophy winner and College Football Hall of Fame running back Ricky Williams, whose remarkable, but embattled, career was synonymous with a young superstar publicly navigating the highs and lows of life’s personal, emotional and mental challenges, has become the second decorated NFL and NCAA legend in as many months to be appointed as an advisory board member and mentor with the three-time champion SoCal Coyotes non-profit sports leadership organization.

Williams joins America’s #1 Developmental Pro Football Program, where he will serve alongside newly appointed Brad Budde in the growth and development of the Coyotes rapidly expanding local, state and national outreach and mentoring efforts. Currently an analyst on the Longhorn Network, Williams has played major roles in youth football programs and the NFL’s overseas American football development initiatives, as far away as China.

“The long-term Coyotes vision of becoming the ‘Harlem Globetrotters’ of faith, family and football mirrors my own global ambitions with the sport,” Williams said. “More importantly, my life is evidence that every young man is not the same, no struggle or trial is identical, and that mentoring and leadership requires patience and sensitivity. There is nothing more rewarding than playing a key role in the development of a young man who finds his way through the sport of football.”

As one of the most dominant college running backs in history, Williams rushed for 6,279 yards, and holds or shares 20 NCAA records. He enjoyed a 11-year professional career, and still holds the Miami Dolphins single-season rushing mark with 1,853 yards.

He openly battled social anxiety disorder, which led the media to often describe him as ‘aloof’ or ‘weird,’ and he was frequently portrayed as  ‘troubled.’ In the NFL, he failed several drug tests and was suspended multiple times, and today these experiences have served as underpinning for his counseling to new generations of youth.

Williams retired from the NFL in 2011. The one-time Pro Bowler spent three seasons in New Orleans, seven seasons in Miami and one season in Baltimore. Williams finished his career with 10,009 rushing yards, 27th best in NFL history. His best season with the Dolphins is the 14th highest single-season total in NFL history.

Williams coached running backs at the University of the Incarnate Word in 2013, and last year, traveled to China to coach a national team in the World University Championship in American Football.

THE COYOTES BELIEVE that powerful mentors with credible life histories bridge the gap for young men who face overwhelming life challenges. The Coyotes believe that love is a four-letter word spelled T-I-M-E, and define a mentor as a coach, guide, tutor, facilitator, counselor, or trusted advisor – someone willing to spend his or her T-I-M-E and expertise to guide the development of another person.

A COYOTE MENTORSHIP is a relationship formed between a mentor and mentee, with the goal of sharing knowledge and expertise. It can be a formal relationship with written goals and scheduled meeting times – or as simple as an informal occasional chat or email exchange.

All Coyote mentors must share seven key qualities: Ability and willingness to communicate what they know; preparedness; approach-ability; availability; ability to listen; honesty with diplomacy; inquisitiveness; objectivity and fairness; and compassion and genuineness. To discover more, visit www.thesocalcoyotes.com.

THE SOCAL COYOTES are nationally acclaimed for their leadership initiatives, including the Coyote Leadership Curriculum shared annually to 30,000 youth; Head of Household Work Leadership (HOWL) program; and widespread community and volunteer efforts. Over seven seasons, the Coyote developmental football program is a standard of success, with three championships and 45 players advancing to NFL, CFL and AFL tryouts and camps.