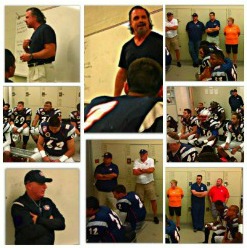 That was the message Brad Budde – legendary USC Rose Bowl Hall of Famer, National Champion, Kansas City Chief and Director of the SoCal Coyotes Mentoring Program – demanded from the three-time champions in an emotional, pre-game locker room address moments before kickoff, in their much-awaited rematch against the San Diego Stallions Saturday night.

Whipped into a frenzy – players standing and shouting ‘Yes, Lord, Yes!’ –they poured from the tunnel and onto the field, and with near-perfection erased their only loss of the year by breaking the tamed San Diego Stallions 61-0, in a complete game that showed how young, talented – and dangerous – these Coyotes have grown up to be.

“When strong young men are willing to stand up and be counted, the spines of the weak stiffen,” said Coyotes head coach J David Miller. The win gave the SoCal Coyotes sole possession of first place in what has been a ‘Miracle Season’ – and, finally, left them in control of their own destiny the rest of the way.

“It feels like college all over again in there,” smiled veteran defensive end and Arizona State product Jake Sheffield, when asked about the Coyotes’ locker room. “But man, are we having fun. We love each other, the chemistry is crazy powerful, and we’re playing as men. We are proving something way more than just football.”

Was James Calhoun – the Coyote Comet – paying attention? Or receiver Stevie Will? Yes, Lord, yes. Calhoun had six catches for 223 yards and four touchdowns. Will had seven catches for 175 and two touchdowns. On his first catch of the night – a 51-yard score – Calhoun became only the third receiver in Coyote history to break 1,000 yards in a season, and now stands at 1,140 with four games to go. Selfless Rashad ‘The Franchise’ Roberts, the veteran receiver whose records Calhoun is shattering, threw the thunderous block that sprung Calhoun for the final 25 yards on his record-setting jaunt.

What about quarterback Zach Adkins, the rookie phenom from Northwestern (La.) State? Yes, Lord, yes. Adkins set a club record for touchdowns in a season – the Coachella Cannon completed 21 of 28 passes to six different receivers for 471 yards and seven touchdowns, a 75-percent completion ratio, an NFL passer rating of 156.25, and ran for 13 yards. With four games remaining, Adkins has 2,565 yards, 38 touchdowns and 1 interception. He broke the single-season mark for total touchdowns (passing/rushing) held by Michael Karls (36), and (passing) Nate Lewis (35). Roberts caught a touchdown. Warren ‘Lil Train’ Matthews, Mario Rolland, and Demario ‘The President’ Brown all added big receptions in the Coyotes’ Silver Stretch attack, that demonstrates weapons all over the field.

On the ground, Matthews carried five times for 117 yards and a touchdown. The last 50 came when the Coyotes mercifully tried to run out the clock, but the 2014 Indoor Football League Rookie of the Year had other plans. Matthews hit the A-gap, double-clutched through an exhausted San Diego defense, and hit the gas, out-running 11 Stallions for the score.

James Calhoun entered the game on defense – not a misprint – late in the game, and screaming in from the free safety position, added two sacks. CB John Paiz, who started his Coyote career on special teams and is now seeing significant playing time, led all tacklers with nine, and snagged an interception.

In the aftermath, the Coyotes locker room was loud, joyful and buzzing with the unmistakable electricity of youth. Calhoun jumped on a bench and turned to his teammates. “Great job tonight,” he yelled. “But let’s clean this mess up.”

“Coyotes always leave things better than they were when we got there,” yelled another.

Coyotes’ director of operations Cinthia Paiz, whose job it is to organize such weekly pandemonium, couldn’t hide a smile.

PROOF OF LIFE – Aussie punter Alex Dunnachie got one opportunity punting – a 54-yarder with no return – and one kickoff. “We wanted his family back home in Melbourne and ProKick Australia to know that he’s still alive,” joked Coyotes head coach J David Miller. “We’ll send the ransom notes Monday.”

ALL HANDS ON DECK – The Coyotes pulled out all the stops for Saturday’s game. In addition to Budde and team president Don West Jr., executives from corporate partners Jule’s Market, Cutting Edge Orthopedics and Coachella Valley Foot & Ankle lined the Coyotes bench in support.

FAITH, FAMILY AND FOOTBALL is the real mission of the Coyotes off the field – and not surprisingly, something that dates back to the great Vince Lombardi in 1959. More than game tape. More than a weight room. More than a 40 time. The Coyote mission reaches so far from the actual gridiron that developing well-rounded young men is just as, if not more, important to the entire organization. The SoCal Coyotes are the nation’s only non-profit sports leadership organization to field a professional football team, and were named ‘America’s #1 Developmental Football Program’ by the Football Educator, operated by former Denver Broncos GM and two-time Super Bowl winner Ted Sundquist.