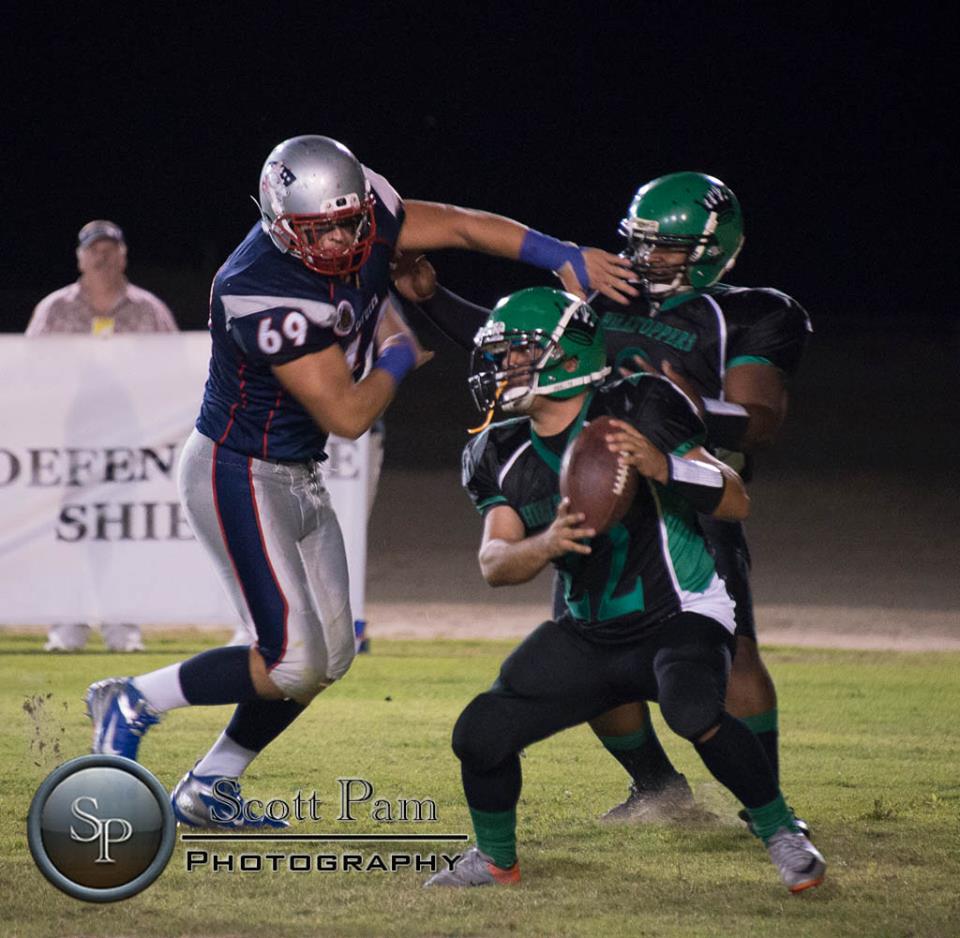 (PALM SPRINGS) — In the weeks leading up to the SoCal Coyotes 35-26 defeat of the proud nationally ranked Southern California Steelers (6-2), the desert dogs were notoriously scrutinized for being unable to stop the run.
The Darkside Defense held the Steelers powerful ground attack — averaging 154 yards per game — to just 84 yards on 24 attempts, with no touchdowns. The Coyotes also held them to 26 points, 10 less than their season average.
After publicized reports described the Coyotes as “soft,” the Darkside Defense answered with thundering punishment from middle linebacker Devin Jones, outside linebackers David Cathcart and Ryan Pervine, and safety Bo Bovain, to name a few.
Steelers quarterback Les Obie, who played collegiately at UNLV,  was 17 for 38 for 313 yards and four touchdowns, but paid a heavy price.
Obie was knocked down nine times by a relentless Coyote pass rush led by speed rusher Devin Howard.  Howard sacked him twice,  and Obie fumbled twice, including one recovered for a Coyote touchdown by defensive tackle Jordan Cornell.
“Devin was cut-blocked seven times while he was engaged by the offensive tackle,” said assistant head coach Wayne Anderson Jr., who is also the Coyotes defensive coordinator. “The officials did a good job of trying to control it, but they can only do so much. Devin still got hurt.
“Fortunately, Devin’s a grown man who taped it up, sucked it up, went back in, picked up another sack and forced a touchdown and made them pay,” Anderson said.
Head coach J. David Miller echoed Anderson regarding the 21-year-old Howard, who a year ago was an NCAA  preseason All-American and led the country in sacks.
“Devin is a clean football player who few teams have an answer for legally,” Miller said. “Going forward, the officials have a responsibility to protect him within the same confines of the rules that we are held to on the other side of the ball.
“You cannot cut block a pass rusher who is engaged by another player, period,” Miller said. “The sad thing is all of our opponents know the rules, and if they continue to do it, they are sending a clear message that they don’t care about this young man’s future.
“We’re proud that Devin rose above it, didn’t complain, and still made a difference in the game.”
Howard leads the Coyotes in sacks with nine.
(DEVIN HOWARD, pictured here against the Hilltoppers, had two sacks, two forced fumbles (one for touchdown), and six quarterback pressures against the Steelers)
Load More Related Articles
Load More By TSCC
Load More In Archived Posts
Click To Comment