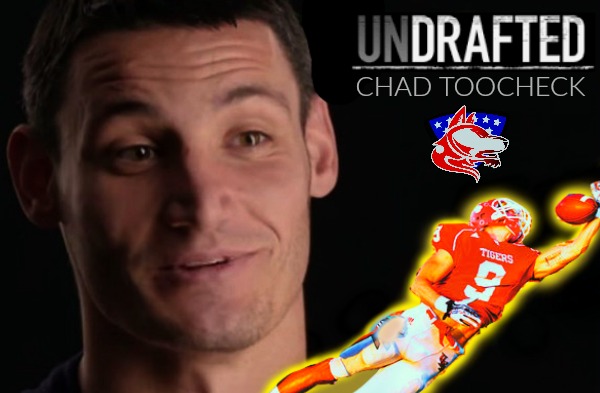 (INDIO) – Celebrated ‘Undrafted’ star and West Alabama wide receiver Chad Toocheck, a blue-collar free-agent who in Fall 2015 attracted a worldwide following on his climb to a heartbreaking final cut on the NFL Network reality series, will make his SoCal Coyotes debut with the four-time champions in Sunday’s Pac West playoff game at 3 p.m. at Shadow Hills Stadium. 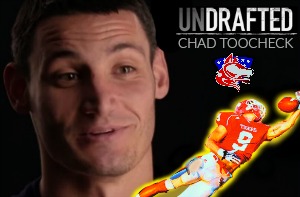 Toocheck, who also fought and won a bout with cancer and appeared briefly this spring with the Arena Football League’s Cleveland Gladiators, will continue his comeback with America’s #1 Developmental Pro Football Program, where he has been on the roster since January 29. Coaches say Toocheck, who will wear jersey #18, has learned the Coyotes base offense and is expected to start.

The NFL Network introduced the world to Toocheck, 6-3, 208, who once ran the streets and sold his blood for alcohol and drugs, and now has been sober for nearly a decade. His stunning comeback story reached a crescendo when he earned a full scholarship at West Alabama – at the ripe age of 25. He was college teammates with current Coyotes cornerback Ridge Turner, who opened the dialogue between Toocheck and SoCal head coach J David Miller last fall.

While at West Alabama, Toocheck also was teammates with 2015 Super Bowl champion and New England Patriot Malcolm Butler, and the pair became close through their separate journeys. After Toocheck was overlooked by all 32 NFL teams in the draft, the NFL Network took notice of his gut-wrenching story, and millions of viewers were touched by his faith, honesty and perseverance.

“Serving God, at this point in my life, is my greatest pursuit,” said Toocheck, who is relocating to the Coachella Valley from his home in Medina, Ohio. “When you pull back the curtain, the Coyotes are far more than just football. The challenges, and miracles, in my life can be used to help the youth of our communities and our nation. Football is a means to grow a ministry where I believe God has uniquely placed my feet.”

ON THE FIELD, 70 PLAYERS EACH YEAR earn the distinction of ‘Defending the Shield’ in the uniform of the SoCal Coyotes. Many will earn a shot each year with NFL, CFL or AFL opportunities, or graduate into business careers. Off the field, in Coachella Valley public schools alone, 30,000 students annually participate in Coyote Leadership Training and receive published Coyote Leadership Curriculum.

THE SOCAL COYOTES raise funds and donate thousands of dollars annually that affect every community they touch. Coyote programs reach thousands of youth through coordinated efforts with numerous local charitable and civic organizations, including Boys & Girls Clubs, the YMCA, the Desert Strength Academy, the Boys & Girl Scouts of America, and Rotary International.