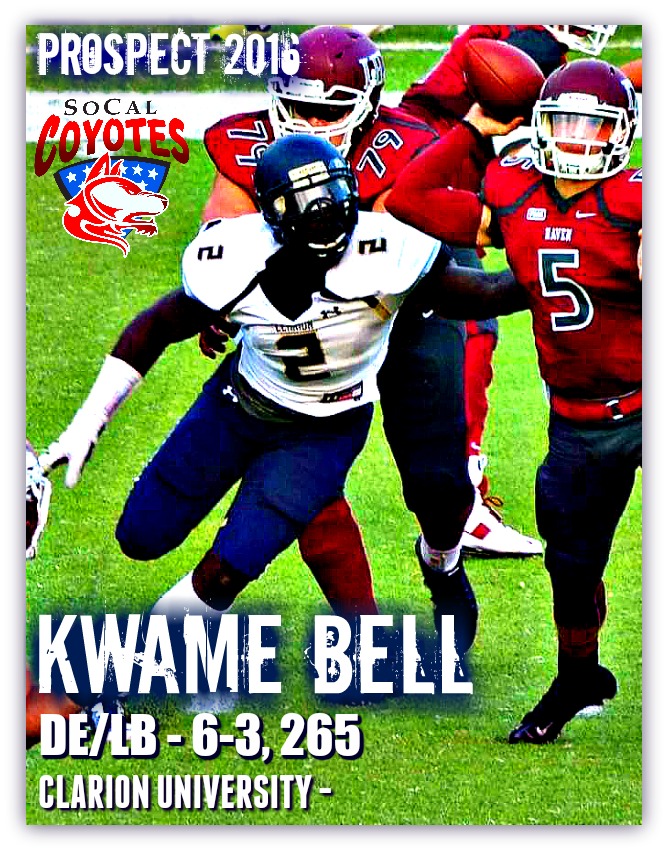 (INDIO) – Speed-rushing defensive end/linebacker Kwame Bell – a small-college sack and fumble-forcing phenom who rose as high as No. 3 on some insiders boards but went undrafted in 2016 – will continue his career with the four-time champion SoCal Coyotes, the professional non-profit sports leadership organization announced today. 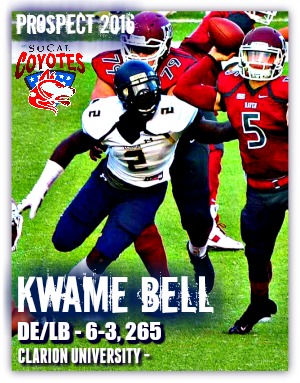 The announcement of Bell is the first shot of the summer signing period fired by the defending LCFL champion Coyotes, whose incoming rookie class for their first fall season in the vaunted Southern California Football League is projected to exceed 20. Bell and his Coyote teammates report to training camp July 28.

NFL scouting reports described Bell, 6-3, 265, as “freakishly powerful” with “blinding first steps” and “violent hands” during their trips to Clarion University, where Bell was an All-Conference player in the Pennsylvania State Athletic Conference. In his last two seasons, he had 19 sacks, 31 tackles for loss, 110 solo stops, forced 10 fumbles and recovered five.

“Kwame is an ‘above-the-line’ young man who is going to have an immediate impact no matter where he lines up,” said Jones, the former N.Y. Jets and Florida State legend who this summer will serve in both NFL and Coyotes training camps.

Head coach J David Miller applauded the efforts of the Coyotes front-office, and called Bell “a young man of superior talent, intelligence and character, who understands what it means to ‘Defend the Shield.’”

Bell began his career as a walk-on at Virginia Union before transferring to Clarion, where he graduated last May with a degree in sports management. His work off the field is equally impressive. Bell worked as a performance coach with youth ages 7-13, was a staff writer for the Clarion newspaper, led political petition drives and volunteered for blood drives, Special Olympics, and raised money for families affected by cancer.

The son of Sheena Bell and (late) Shawn Nelson/Catherine and Joe Steffa, Bell was a two-time all-City selection at Roxborough High School, where he played tight end, offensive and defensive line.

The Coyotes open at home at Shadow Hills August 13, against the Central Coast Seminoles (Oxnard).