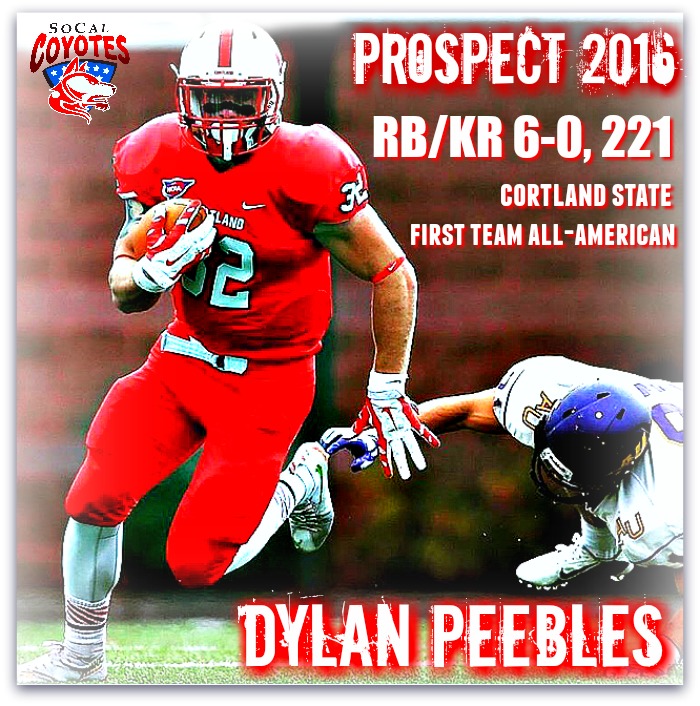 (INDIO) – The night before the NFL draft, the New York Jets told Cortland State’s All-American D-III running back and return specialist Dylan Peebles to stay near his phone – because he soon would be among their free-agent signings. That call never came – but another New York Jet finally came through. 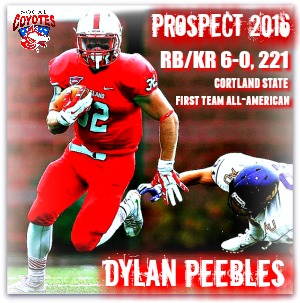 “When one door closes, another opens,” said Peebles, 6-0, 221, who reports to the defending LCFL champion Coyotes July 28. He joins an incoming Coyote rookie class expected to rival any in franchise history, as the team prepares for its first fall season in the vaunted Southern California Football League, home to four of the country’s Top 10 teams.

“NFL teams are going to see how much I’ve progressed since last fall,” Peebles said. “I can’t wait to take over the load in the Coyote backfield. I can be relied on to get that extra yard or make the huge block to bust a big play. I want every record (the Coyotes) have.”

Peebles is no stranger to records. A first-team all-conference selection since 2013, Peebles’ spectacular college career includes first-team All-American, All-Region, All-Empire, All-ECAC and All-East.  “Can run over you, through you, or around you,” wrote one scout.

Peebles strength and size impressed scouts at February’s NFL Regional in Baltimore. His consistent 4.48 speed made him virtually unstoppable as a collegiate kick returner – he was the nation’s active leader in kick return average (34.9) his entire college career.

“I’m ready to ‘Defend the Shield,’” said Peebles, who graduated from SUNY Cortland with a Bachelor’s Degree in Exercise Science. “It’s a blessing to be able to put on a football helmet for the 18th year. I’m looking forward to the comradery, the opportunity to be back in the locker room, to further my career, and get the Coyotes another championship. This is going to be special.”

“Dylan is so versatile, he can hurt you as a back, as a returner, as a blocker, as a receiver,” said Jones, who this summer will serve in both NFL and Coyotes training camps. Head coach J David Miller agreed, saying Peebles promises “character, competence, and consistency to our offense.”

The son of Darren and Kristen Peebles, Dylan also expressed gratitude to Accelerate Sports, who trained him through the combines.