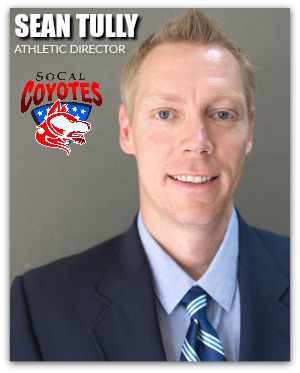 (INDIO) – Coachella Valley youth between the ages of 8-18 will soon have the opportunity to ‘Defend the Shield’ in flag football, soccer and a broadening array of positive youth development initiatives spearheaded by the four-time champion SoCal Coyotes, according to Sean M. Tully, the newly named Athletic Director of the professional non-profit sports leadership organization.

Coyote Positive Youth Development (CPYD) is based on the belief that, given guidance and support from caring adults, all Coachella Valley youth can grow up healthy and happy, making positive contributions to their families, schools, and communities.

In addition, Coyote youth programs will support a wide range of comprehensive services, compliance and collaborations at the local, Tribal, State, and national levels.

The Coyotes, whose popular leadership programs throughout Coachella Valley middle- and high schools touch 30,000 youth annually, will begin adding youth flag-football and soccer teams to their widening footprint in 2017.

Mr. Tully immediately takes on responsibilities in the planning, implementation and promotion of all athletic activities of the Coyotes non-profit, with direct administration and orientation of youth sports and leadership programs.

Mr. Tully was a high school defensive back and soccer player, and chose a soccer scholarship to learn business administration at Concordia University. He built a successful career managing national broker networks with big-box giants SAM’s and Costco, among others, before accepting what he calls a “divine calling and passion” to lead youth.

After pivoting full-time to ministry, Mr. Tully – for the past seven years – has served Cornerstone Church and Tesoro ministries, where he rose to Director of Sports and Recreation. He is the architect of youth programs that produced positive outcomes through sports, mentoring, fundraisers and faith-based instruction. During his tenure, he was responsible for hundreds of junior high- and high-school students, parents, coaches, teachers, and volunteers.

Mr. Tully can be reached at [email protected]