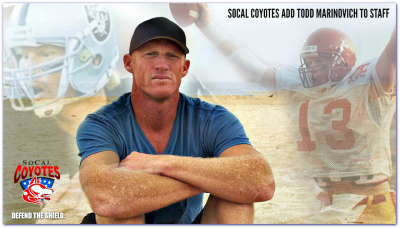 (INDIO) – Former USC Rose Bowl champion and Los Angeles Raiders first-round draft pick Todd Marinovich, whose battles with addiction have derailed his life since his meteoric rise to fame, will return to football with the SoCal Coyotes Non-Profit Sports Leadership Organization as a coach, speaker, and counselor. 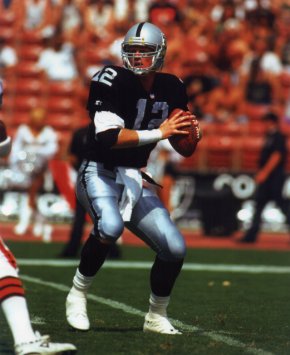 America’s #1 Developmental Pro Football Program™ announced today that Marinovich, the subject of an ESPN Films 30-for-30, will tutor the Coyotes pro prospects, namely quarterbacks and skill players.
Off the field, Marinovich will devote himself to sharing the cautionary tale of his life to the organization’s massive outreach efforts that impact 30,000 Coachella Valley youth each year.
“Let him without sin throw the first stone,” said head coach J David Miller, who confirmed he had added the embattled Marinovich to his staff for the team’s upcoming 10th season. The coach said he believes Marinovich – and his story – will have a ‘profound effect’ in the team’s annual camps, clinics and leadership symposiums, especially those directed to at-risk youth.
“We understand the tenuous gravity of his situation,” Coach Miller said in his announcement of Marinovich. “But ‘Faith, Family and Football’ is not just a bumper sticker here. It’s real life. We believe in Todd, we’ve prayed for him a long time. We believe everybody deserves forgiveness, mercy, grace, and yes, another chance.”
Once heralded as America’s ‘Robo QB’ for his father’s strict upbringing and innovative training techniques, Marinovich was a national record-setting prep star. As a college sophomore, he led USC to a 1990 Rose Bowl victory and was drafted in the first round in 1991 by the Los Angeles Raiders, where he played two seasons.
His brief two-year stint in the Arena Football League included throwing 10 touchdowns in a single game with the Los Angeles Avengers, before closing out his playing career in the Canadian Football League. Since football, Marinovich, now a father of two, also has worked as a commissioned artist.
Marinovich’s ongoing recovery and honesty “is a personal, daily, 24-hour cycle that’s between him and our Creator,” Miller said. “And if you believe in Jesus, you have to believe in comebacks.”
CONVEYOR BELT OF CHARACTER – The perennial champion SoCal Coyotes non-profit sports leadership organization is a conveyor belt of character, competence, and connection, delivering life-changing leadership skills to thousands of youth each year through an array of programs, camps, clinics and expos.
DISCOVER how The Pro Football Educator, operated by former Denver Broncos GM and two-time Super Bowl winner Ted Sundquist, selected the SoCal Coyotes as America’s #1 Developmental Pro Football Program. Visit www.thesocalcoyotes.com.
FAITH, FAMILY, FOOTBALL is the real mission of the Coyotes – and not surprisingly, something that dates back to the great Vince Lombardi in 1959. More than game tape. More than a weight room. More than a 40 time. The Coyote mission of ‘Building Champions, Building Men™’ reaches far beyond the actual gridiron, deep into the development of young athletes as fathers, husbands, and men.
SEVENTY PLAYERS EACH YEAR earn the distinction to ‘Defend the Shield™’ in the uniform of the SoCal Coyotes. Many will earn a shot with NFL, CFL or AFL opportunities, or graduate into business careers.
For more information, email SVP Ron DiGrandi at [email protected]
Load More Related Articles
Load More By TSCC
Load More In Archived Posts
Comments are closed.