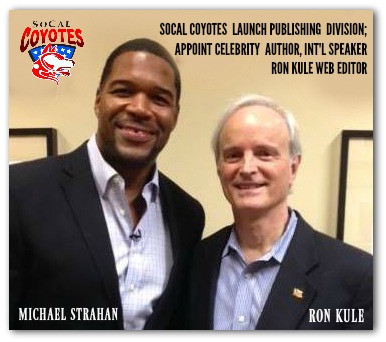 (INDIO) – Internationally published biographer, poet, author of non-fiction and novels, and sales-training expert Ronald Joseph Kule has been appointed senior web editor by SoCal Coyotes Publishing, a division of the SoCal Coyotes non-profit sports leadership organization.
Kule will serve as an editor, writer and publisher across all Coyote platforms to meet the growing demands of the non-profit, whose Facebook platform reaches 14,000 followers, and whose educational curriculum regionally touches 30,000 youth annually.
The Coyotes will publish their own books for the first time this year. Outside of football, the Coyotes are expanding their national horizon to include 2017 youth initiatives in Florida, Missouri and Texas.
Kule has served in various capacities with the Coyotes since their incorporation. His relationship with head coach, author and business strategist J David Miller dates back over a decade. In 2010, the two collaborated as co-authors of ‘Carolina Baseball – Pressure Makes Diamonds,’ with South Carolina baseball legend and now Athletic Director Ray Tanner. 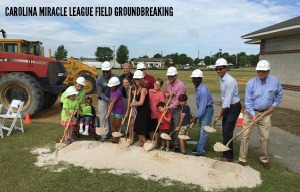 The Ray Tanner Foundation directed all proceeds from that effort toward the building of a Carolina Miracle League Field, that removes barriers for physically challenged youth to play baseball.
Ten of Kule’s current books can be found on Amazon.com, including the best-selling ‘Listen More Sell More,’ which sells around the world in multiple languages. He is founder of KuleBooks LLC.
Kule and Miller are stablemates of New York-based Skyhorse Publishing, where each have authored separate titles.
Born in Bogota, Colombia, Kule is a descendant of Polish-American and Colombian-Chilean parentage. He is passionate about the Coyotes social-outreach initiatives, which he credits to his direct observations of the ethnic values and cultural differences among the disparate social classes and living conditions of Colombia, Peru, Chile, as well as time spent in 35 other countries.
DISCOVER HOW ‘PRESSURE MAKES DIAMONDS’ contributed to a Carolina Miracle League Field through the Ray Tanner Foundation. Visit http://spursandfeathers.com/gamecock_club/2016-17/Releases/miraclefield820.
CONVEYOR BELT OF CHARACTER – The perennial champion SoCal Coyotes non-profit sports leadership organization is a conveyor belt of character, competence, and connection, delivering life-changing leadership skills to thousands of youth each year through an array of programs, camps, clinics and expos.
DISCOVER how The Pro Football Educator, operated by former Denver Broncos GM and two-time Super Bowl winner Ted Sundquist, selected the SoCal Coyotes as America’s #1 Developmental Pro Football Program. Visit www.thesocalcoyotes.com.
FAITH, FAMILY, FOOTBALL is the real mission of the Coyotes – and not surprisingly, something that dates back to the great Vince Lombardi in 1959. More than game tape. More than a weight room. More than a 40 time. The Coyote mission of ‘Building Champions, Building Men™’ reaches far beyond the actual gridiron, deep into the development of young athletes as fathers, husbands, and men.
SEVENTY PLAYERS EACH YEAR earn the distinction to ‘Defend the Shield™’ in the uniform of the SoCal Coyotes. Many will earn a shot with NFL, CFL or AFL opportunities, or graduate into business careers.
For more information, email SVP Ron DiGrandi at [email protected]
Load More Related Articles
Load More By TSCC
Load More In Archived Posts
Comments are closed.