Home Archived Posts PRESIDENT DON WEST JR. ON 2017: ‘WE ARE ALL AUDITIONING FOR THE NFL’ 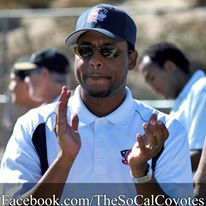 (INDIO) – SoCal Coyotes team president Don West Jr. confirmed today he is finalizing a February announcement on the 2017 season that will elevate America’s #1 Developmental Pro Football Program to a much larger stage, commencing in May and ending prior to NFL training camps.

In a confidential ‘state of the union’ letter to staff, the former sports and entertainment attorney vowed the team’s 10th season in five years will maximize national exposure for the players, coaches and front office staff of the perennial champion non-profit sports leadership organization that went undefeated for a second time in 2016.

“We have worked tirelessly to identify and qualify the right platform that embraces our national brand and community-driven model,” said West, who is based in Los Angeles. “We are close to an agreement that will genuinely showcase our program’s character and culture.”

The Coyotes are the only team in the entire state of California ranked in the country’s Top 20 by National Football Events, a Chicago-based governing body that sanctions developmental football.

Evolving from humble beginnings to a national power required the Coyotes to put a steep criteria on all future league and business affiliations, West said.

“The requirements for a thriving and robust developmental football league are a competitive product on the playing field, like-minded, seasoned sports business executives guiding the organizations, a fair and non-biased commissioner, and impartial officiating during games,” the veteran pro football executive said.

“We are now poised to partner with major organizations like the National Football League, and any such alliance we now make requires that every organization we do business with – their personnel business affairs and records must be able to withstand the same intense scrutiny and due diligence as ours.”

For the Coyotes, football and the daily development of credible players and men is not enough, and only one piece of the equation.

“We feel the entire Coyote organization is auditioning for the NFL,” West said, noting half the team’s board has been there, including NFL legends like Brad Budde, Ricky Williams, Marvin Jones and Mo Lewis. 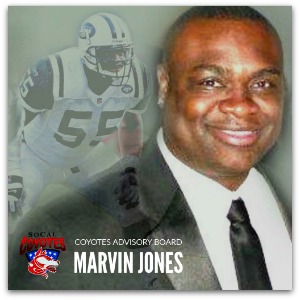 Jones, the Coyotes director of pro personnel, “shopped for the groceries” among 2016 graduating college seniors and undrafted free agents, and advised head coach J David Miller through the development of a team that went undefeated, and outscored and outclassed opponents, 406-43.

“We feel the watchful eyes of individuals like (Dallas Cowboys VP) Stephen Jones and (NFL executive) Troy Vincent are monitoring the marketplace looking to see who will pioneer and lead the charge in the NFL’s developmental football corridor,” West said.

“My prediction is that in the next 24 months, only properly structured and well-managed organizations like ours, with demonstrable community impact programs that bear measurable results, can be taken seriously.”

No other organization in the nation “currently has a developmental football model that is scalable, with a clean five-year operating track record that comes close to producing our verifiable data, curriculum, sales, public-private sector alliances, and measured results,” West said. “Football professionals around the country tell me that we have become the national model. Until someone can prove otherwise, I humbly agree.”

The Coyotes have a broad array of powerful corporate partners, including the City of Indio, home to Coachellafest, the nation’s largest outdoor music festival. Indio Mayor Glenn Miller and California State Senator Jeff Stone are vocal Coyote advocates, and their vision of an Indio sports complex includes a new permanent home for the Coyotes.

Championship football is a platform for the Coyotes as committed civic servants, who volunteer and support over 100 community programs and agencies across the Coachella Valley. The Coyotes offer an impressive lineup of alternative youth programming, with camps, clinics, symposiums and leadership curriculum that affect over 30,000 youth each year.

“Coach Miller is committed to winning, but he’s more committed to building men and building the Coachella Valley,” Mr. West said of the team’s architect and Hall of Fame three-time Coach of the Year.

“That’s what turns heads across the country. The real magic is our passion for our desert communities, engaging everyone that lives and works here, and our ability to make a difference.”

THE FORMER SENIOR VP of Sports Operations for Steinberg Sports & Entertainment, Mr. West received his B.S. degree in 1996 from Florida State University and his J.D. degree in 2000 from the University of Miami School of Law.

He has vast experience counseling families, individuals and entities on the principles of generational legacy and wealth transfer with a unique planning philosophy of promoting “Healthy & Sustained Family Wealth.” He is also certified as a Chartered Legacy & Trusts Planner (CLTP).

Mr. West has been an Adjunct Professor of Law at the University of Miami School of Law where he taught the course Athletics & Law, and he has authored numerous articles on sports, entertainment, estate planning, trusts, and business law.

PACIFIC PRO FOOTBALL – West said the Coyotes 2017 plans are unaffected by this week’s news about Pacific Pro Football, a new league that aims to begin play in 2018 with four teams based in Southern California. Like the Coyotes, the goal of that league is to give young prospects a professional outlet to prepare for the NFL, according to former NFL coach and executive Mike Shanahan, and Don Yee, the league’s CEO.

The league launches in the midst of a growing debate about amateurism and a college model that rewards student-athletes with scholarships but not salaries. Labor lawyers have challenged the NCAA, and the battle is being waged in several court rooms across the country.

Like Coyotes head coach and architect J David Miller, Yee has been an outspoken critic of the college model. Coach Miller, meanwhile, co-authored the national best-selling book SuperAgent: The One Book the NFL and NCAA Don’t Want You To Read, with heralded NFL agent Jerry Argovitz, a Rancho Mirage resident, philanthropist and former owner of the USFL’s Houston Gamblers. 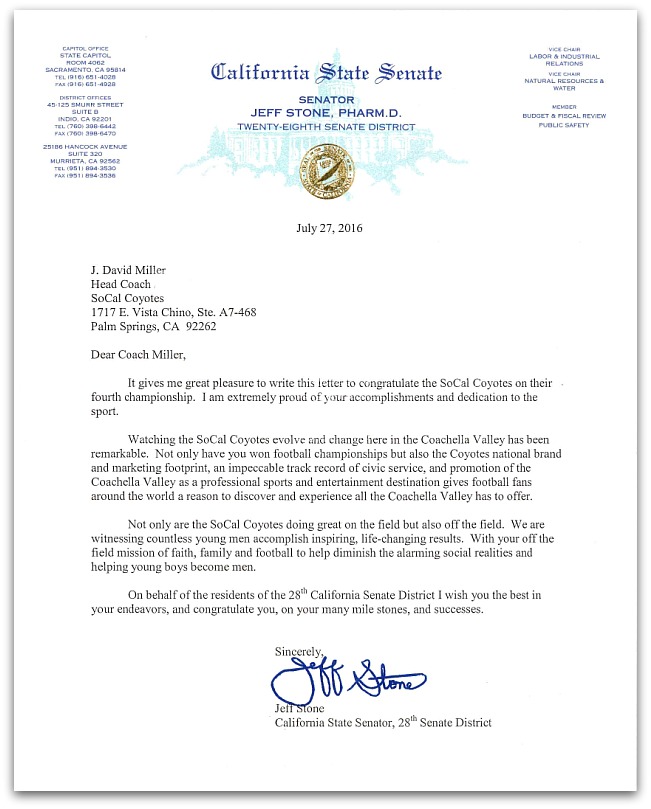