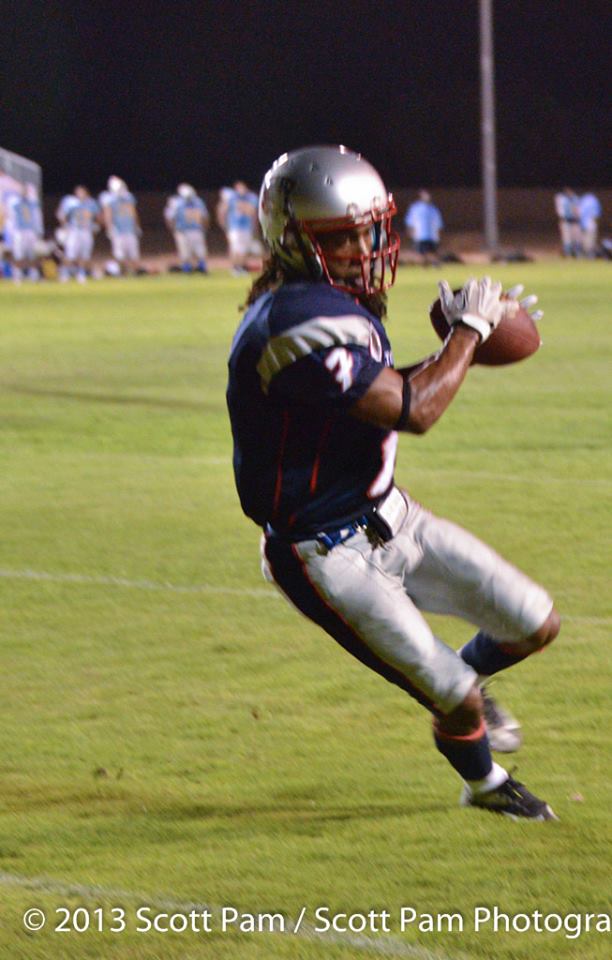 (PALM DESERT) — It was only minutes before kickoff last Saturday night against the four-time champion San Diego Thunder when SoCal Coyotes head coach J. David Miller gathered his young troops and furiously implored them that “four or five plays will be the difference,” and that “close games against championship teams come down to who makes the fewest mistakes.”

Sadly, the Hall-of-Fame coach was right on both counts — and it came at the expense of another all-world performance by Coyotes receiver Rashad “The Franchise” Roberts, as the Thunder rallied from a 17-0 deficit to win a wild 44-34 shootout at Xavier College Prep.

The SoCal defense surrendered only two long touchdowns – a 56-yard run and a 63-yard pass – but when combined with 150 yards in penalties that led to critical San Diego first downs, it was too much to overcome for the record-shattering Roberts, who turned in an eye-popping 294-yard receiving performance.

Despite the outcome, the deafening home crowd got their money’s worth.

SoCal quarterback Nate Lewis, who finished the night 28-43 for 514 yards and three scores, put on a Silver Stretch, Run ‘n’ Shoot clinic for most of the game, and completed passes to nine different receivers.

The Coyotes scored on their first three possessions, easily jumping to a 17-0 lead. After S-back Nigel Simmons turned a screen pass into a 39-yard score, the Coyotes defense held, and Lewis capped a second drive with an easy post-corner to Roberts.

Lewis had the Coyotes marching for another apparent score when a simple mistake would change the game. A Lewis pass bounced high into the air off the shoulder pads of his wide-open receiver at the San Diego 22, and two plays after the ensuing interception, the veteran Thunder scored on a momentum-killing 56-yard touchdown run.

“We teach our receivers every day to catch the ball ‘in the noose’ – that nothing good happens when you catch it off your pads,” said Miller. “It’s too bad we had to prove it. That was a 14-point swing that took us from a good night to a gun fight.”

By halftime, the Thunder held a 20-17 lead, and the second half was a see-saw war. Lewis kept the gritty Coyotes in the game with strikes to Kevin Page and Wayne Jacobs that led to a slashing two-yard touchdown by Simmons, and kicker Dan Kelly answered a San Diego field goal with a 32-yarder of his own.

The Coyotes seemed to gain back momentum and had the Thunder pinned deep in their own territory on third and 31 – only to give up a back-breaking 49-yard pass that would ultimately lead to another San Diego touchdown. “Mistakes killed us,” said Miller. “On that drive alone, we gave up 55 yards in penalties.”

The inimitable Rashad Roberts , meanwhile, was downright dazzling. Catch after catch, “The Franchise” skied high for critical first downs with sensational acrobatic stabs. Then, with the game on the line, the clutch Roberts outraced a San Diego corner for a perfect 80-yard rainbow from Lewis that pulled the Coyotes to within 37-34 with just under two minutes to play.

But the Coyotes, who were out of timeouts, barely lost the onside kick.

The Thunder, who had two players ejected during the contest and had another player hurl a ball into the SoCal Coyotes grandstand, ended the game with a 35-yard meaningless touchdown.

The Coyotes (1-1) will travel to Pasadena this weekend for a showdown with the California Tide.

(FOR COMPLETE STATS AND SCORING SUMMARY, download the SoCal Coyotes Mobile YAPP in the iTunes Store or Android Market and click on Stats.)