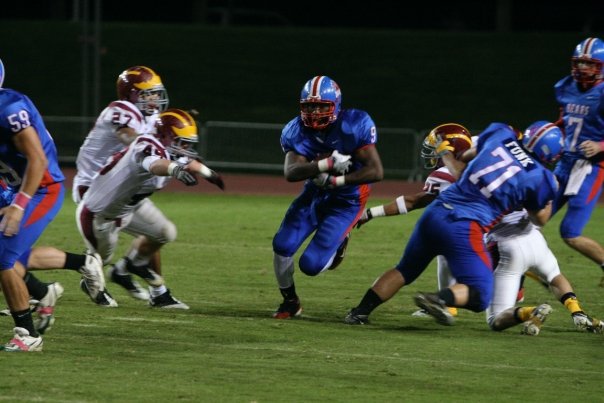 That was the clear message sent today by the SoCal Coyotes who continued to stockpile weapons in their no-huddle Run ‘n’ Shoot attack with the signing of former College of Sequoias starter Nigel Simmons, 21, who has averaged 4.7 yards a carry over a sterling college career.

Simmons will battle for playing time behind SoCal All-American and fan favorite David “The Diesel” Cathcart, who holds virtually every team rushing record.

“I’m excited to be a Coyote, and be a part of this program,” said Simmons, who will join the team in 13 days. “I can’t wait to get to practice and do my talking on the field. I’m all about competition. I can’t wait to make my teammates better and prove that I belong here.”

Simmons is just two years removed from an all-star senior prep season where he averaged 6.7 yards a carry en route to 636 rushing yards and 16 touchdowns.

“Nigel is a young, exciting runner, and a prototype Superback in our system,” said Coyotes head coach J. David Miller. “He’s a big body who can attack the play-side defensive end. He catches everything out of the backfield. He’s a slasher between the tackles, gets downhill on the traps and draws, and can out run you to the corner.

“A couple things stood out on film — Nigel always broke the first tackle or made the first guy miss,” Miller added. “He piled up a lot of first downs without any help. He finds the end zone after contact. And he’s not afraid to sacrifice his body to keep his quarterback standing up.”

The SoCal Coyotes — 19-4 over the past two seasons — report to training camp July 23. The 2012 Pac West champions open at home at Xavier College Prep on August 24 against San Diego.

It will be the team’s first game in the UFAL Eastern Division of the Southern California Football Alliance.

For tickets to see AAA football’s Greatest Show on Turf, email soc[email protected], or call 760.668.5810. To view the entire schedule, go to www.thesocalcoyotes.com.