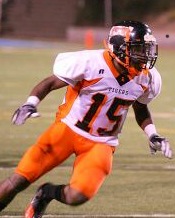 (SACRAMENTO) — When you’re 5’9″ and 160 pounds, and your opponents still won’t throw your direction, you do the next best thing.

You hit everything that moves.

Ask Chris Kelly, 21, a press-cover corner at Reedley College who signed today with the 2012 Pac West champion SoCal Coyotes and will report to the team in July. In his last season, Kelly started all 10 games, made 51 solo tackles, had four interceptions and returned two punts.

Kelly was noted for suffocating man coverage, but his nose for the ball and ferocious hitting turned heads. He will step into a young Coyotes secondary that features the speed and lanky physicality of opposite corner Dana “Lights Out” Prieto and the spine-rattling of All-American safety Bo “Night Train” Bovain.

“Chris is an intelligent, physical corner who not only can shut you down, but also fall off and fool you,” said Coyotes head coach J. David Miller. “He doesn’t miss tackles. He’s going to force everything inside, where we pose a lot of danger. With our linebackers, you’re taking your life in your own hands.”

Roaming the middle of the field this fall for the Coyotes will be head-hunting Bayou Bowl MVP linebacker Devin Jones, a fact not lost on Kelly.

“I’m very excited to join the Darkside Defense and be a part of the Coyotes family,” he said this morning, moments after signing his contract. “This team has talent and speed everywhere, and I’m ready to get the competition going.”

Kelly also set a high school school record two years ago with a 99-yard kickoff return, just another example of how coaches used his 4.4 speed.

The SoCal Coyotes — 19-4 over the past two seasons — report to training camp July 23. The team will open at home at Xavier College Prep on August 24 against San Diego.

It will be the Coyotes first game in the UFAL Eastern Division of the Southern California Football Alliance.