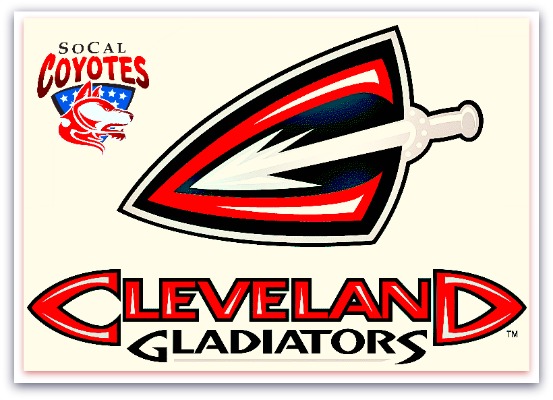 Toocheck, 6-3, 208, is joined in Cleveland by defensive back ‘Sugar’ Shaine Boyle, the Coyotes all-time interception leader, and Spencer Lee, former Coyotes videographer and quality control coach.
“Effective leadership attracts, promotes and multiplies the talents of others,” said Coyotes head coach J David Miller. “Once a Coyote, always a Coyote. We are proud of every one of them. We love to see them exercise their gifts, and see what they do with what they’ve learned here.”
After his first Cleveland practice, Toocheck was part of an impromptu ‘faith, family, football’ kneel-down prayer circle led by Boyle, who did the same as a Coyote.
“It’s pretty amazing, the reach of the Coyote program,” said Toocheck, who still intends to move to the Coachella Valley after the AFL season. Boyle and his family also reside in the desert, and he participated with the Coyotes in their recent youth football camp at Shadow Hills.
With game film and staff reports sent weekly to scouts, agents and AFL, CFL and NFL teams, the Coyote program has become a revolving door. Five players have worked out for Arena Football and Canadian Football League teams in the past few weeks alone. Back-to-back spring-fall Coyote seasons keep players fresh, and game ready.
Toocheck, who wasn’t expected to play until this fall, is the most recent player plucked from the Coyotes. Coach Miller, who was on the phone with two other Arena coaches Wednesday afternoon, said Cleveland’s latest grab is more affirmation of the Coyotes growing national footprint.
“The Coyote program is about opportunity,” Coach Miller said. “We received many calls after Chad signed here, and the success of Sugar Shaine or Chad, or our other great players who have advanced, brings that much more attention and inspiration to everyone here.”
Ironically, the game film efforts of Spencer Lee, who is doing video reports with the Gladiators, have played a central role in countless Coyote opportunities. He joined the Coyotes in 2013, and remains heavily involved in several off-field projects with Coach Miller and Coyote patriarch Mouse Davis.
ON THE FIELD, 70 PLAYERS EACH YEAR earn the distinction of ‘Defending the Shield’ in the uniform of the SoCal Coyotes. Many will earn a shot with NFL, CFL or AFL opportunities, or graduate into business careers. Off the field, more than 30,000 Coachella Valley youth annually participate in Coyote Leadership Training and receive published Coyote Leadership Curriculum.
THE SOCAL COYOTES affect every community they touch. Coyote programs reach thousands of youth through coordinated efforts with numerous local charitable and civic organizations, including Boys & Girls Clubs, the YMCA, the Desert Strength Academy, the Boys & Girl Scouts of America, and Rotary International.
Discover more at www.thesocalcoyotes.com.
-Ron DiGrandi, SVP & Community Outreach ([email protected], 760.285.7073)
Load More Related Articles
Load More By admin
Load More In Uncategorized
Comments are closed.