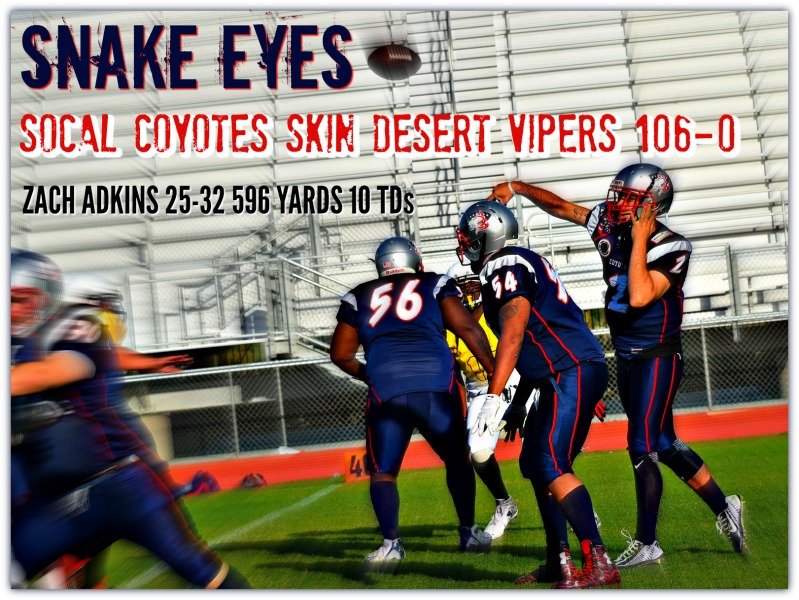 On another gorgeous desert day of faith, family, football and fun brought to you by General Air Conditioning & Plumbing, the Coyotes thrilled fans with the 106-point explosion. The output was the most ever scored by the formidable Coyote machine, despite the fact the champions spread the wealth, played their entire bench, and started 13 first- and second-year players.

The spring season – by design – is meant to test the depth of the Coyotes roster and vet their influx of new skill. But with so many new faces having so much fun – and the festival atmosphere of music, food and entertainment – Sunday’s game-day experience felt like a raucous Coyote cookout.

The Desert Vipers wound up on the grill, and every member of America’s #1 Developmental Pro Football Program enjoyed the feast. 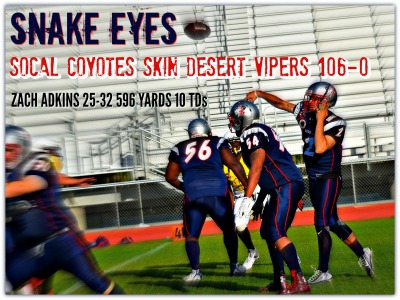 -Rashad ‘The Franchise’ Roberts had five catches for 119 yards, including a 30-yard touchdown and three two-point conversions.

-Second-year man Matt Arias had four catches for 71 yards, including a 21-yard touchdown, and a two-point conversion.

-Rookie linebacker Gael Esparza (Waldorf College) had two interceptions, and returned one 47 yards for a touchdown.

-Rookie defensive back Denziel Myers returned a fumble 41 yards for a touchdown.

THE LAST TIME THE Coyotes broke the century mark was a 102-0 drubbing of the SoCal Eagles on November 9, 2015. No surprise here – the Coyotes lead the Pac West in scoring with 256 points, over 100 more than the next team.

RUN ‘N’ SHOOT HISTORIANS were quick to point out that the 106 points topped the high of 105 scored by a Mouse Davis-coached team, when his Run ‘n’ Shoot Portland State Vikings beat Delaware State on November 8, 1980. Davis, the godfather of the Run ‘n’ Shoot and modern four-wide offense, is a mentor to SoCal head coach J David Miller, and a patriarch of the Coyote program.

BACK TO BACK – Fans of the four-time champion SoCal Coyotes barely had a chance to find their seats Sunday before Calhoun electrified the afternoon by returning the first two Desert Viper punts 77 and 76 yards for touchdowns.

The good news for the fang-less Vipers was that Calhoun’s heroics momentarily kept the Coyotes’ potent Silver Stretch Run ‘n’ Shoot off the field. The bad news? Coyotes quarterback and CFL prospect Zach Adkins, making his first appearance of the spring Pac West season, is not a patient man.

Adkins first two throws of the day were rip-your-heart-out touchdowns – 68 yards to – yep – Calhoun, and a 30-yard strike to Rashad ‘The Franchise’ Roberts.

HERE COMES THE GENERAL – General Coyote – the life-size mascot of the SoCal Coyotes & General Air Conditioning & Plumbing, gave away coloring books to kids and tossed out footballs to fans. Parents in attendance, however,got the best deal – more than $500 in General gift cards.