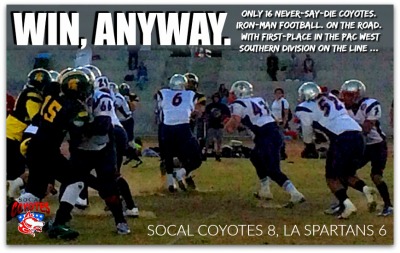 (LONG BEACH) – If the four-time champion SoCal Coyotes are anything, they are resilient. And selfless, and resourceful. And calm, and patient. And responsible and respectful – the kind of men under pressure you would trust with your daughter, or as community leaders, or, at the very least, with your football team.

Those were just a few of the superlatives head coach J David Miller was tossing around Saturday night, and rightfully so, after the Coyotes traveled to Long Beach with only 16 players to face 30-odd Los Angeles Spartans. Because to Coach Miller, football and all of its drama and trauma and crises and euphoria is just a metaphor of life, a tiny little pizza slice of sport that God tosses your way to see if you might be worthy one day of a filet mignon.

So forgive Miller’s excitement, after he witnessed his depleted spring Coyotes – a mixture of very young, very raw street talent, led by a few powerful, veteran Coyote mentors – somehow pound out a “downright ugly, absolutely beautiful,” 8-6 victory, avoid any new injuries, and keep their grip on first place in the Pac West Southern Division, with four regular-season games to play.

On a weekend when Coyote alumni like Shaine Boyle was starring in the Arena Football League on ESPN and Devin Jones was working out with the Cleveland Gladiators, back here, in the Coyote crucible, veterans were reminding rookies how they got there.

On this night, ultimately, it would be the unflappable Rashad ‘The Franchise’ Roberts on a 26-yard, pinball, stop-start, spinning and winning soar into the end zone that provided the Coyotes only touchdown. On the deciding two-point conversion, Gary Young, the linebacker-turned-running back, followed defensive-end-turned-fullback Javonte Brown into a wave of Spartans and the Coyote pile didn’t stop moving until the referees raised their arms.

The ‘Stagger Lee’ formation – born out of necessity this spring – has proved to be the Coyotes saving grace. Part Run ‘n’ Shoot, part veer, part wishbone, the Coyotes rotated linemen through the backfield, something they work on – 100 plays at a time – each practice. Stagger Lee dominated the game, with Young, Brown and Jake Sheffield rushing 31 times for 167 yards.

Those same three joined linemen Johnathan Zazueta, Cedric Cox and Andrew Deuber to protect Roberts, and harass the Spartans, depending on which way they were going. Linebackers Cody Carhart and Gael Esparza rotated on the o-line and learned to kick step. Slotback Sean Vickers had two big catches and showed progress. Wide receiver Matt Arias moved the chains on offense, and flew around on defense, too.

Four times a fresh Spartans offense had lengthy, dust-filled, time-consuming drives against an exhausted Coyote defense, marching deep inside the SoCal 15. All four times they came away – with nothing.

Safety Anthony Spencer, who played with broken ribs, teamed with veteran Bo Bovain to direct traffic in a secondary that included John Paiz, Dominic Lowery-Bowen, Denziel Myers and Robert Thomas. They gave up one long touchdown, but knocked down, nearly intercepted or defensed a dozen other attempts. Every time the ball was in the air, Miller said he was reminded of Steve Martin, watching his son’s game-winning catch in the movie ‘Parenthood.’

“There is winning, and there is misery, and the pups have discovered one is way more fun,” the coach smiled.

With a spring roster that has literally become whoever team doctors clear for that week, Coyote coaches tirelessly teach that “seasons come in sections,” including unpredictable waves of injuries. For these learning-how-to-win Coyotes, in a season that has turned into more faith than football, no “section” can be more important than winning the first two of this four-game road swing, with half the roster gone.

Sixteen players took a quiet ride home. They had bumps. They had bruises. But they are 5-1 and in control of their own Pac West destiny. In this coming-of-age story, that’s almost as good as a Coachella Valley sunrise. And make no mistake – Coach Miller is very, very proud of his boys.

THE COYOTES REMAIN on the road this week, traveling back to Los Angeles to face the Hilltoppers.