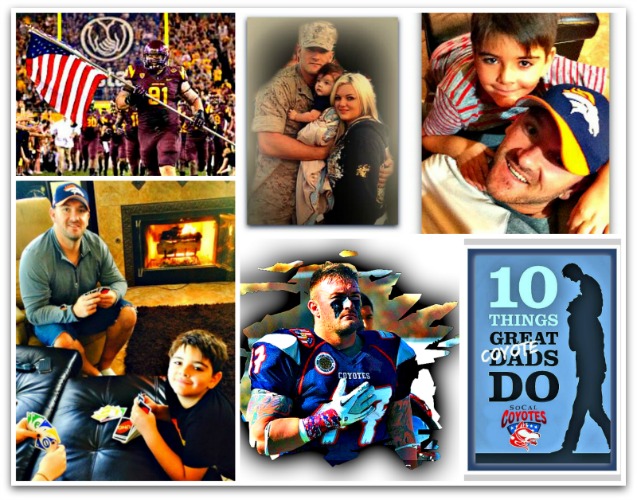 (PALM SPRINGS) – It was Thanksgiving, and family night, for SoCal Coyotes defensive end Jake Sheffield. His 6-3, 295-pound frame was coiled on a sofa, snuggling seven-year-old son Haiden, and enjoying the company of his mom, Lori Greenwald-Funk, and step-dad Billy, who had driven from Colorado for the holiday. 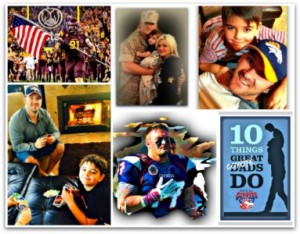 Together, they were watching ‘Keep on Keepin’ On,’ a documentary film about 89-year-old jazz legend Clark Terry – Quincy Jones’ first teacher, and one of the few performers to ever have played in the world-famous bands of both Count Basie and Duke Ellington. In the film, Terry, in his waning final three years before he passed away, mentors young Justin Kauflin, a 23-year-old, blind, piano prodigy. With death knocking, and now his own sight disappearing, Terry turned to Kauflin and uttered words of life-searing wisdom.

For the Coyotes all-time sack leader, it’s the story of his life.

LORI, A SINGLE MOM, RAISED JAKE and his sister Chennelle in Aurora, Colorado, a suburb just east of Denver. Her home was as warm as her spirit. Lori demanded that her kids respect authority and trust God, and she made ends meet by working three jobs, paying her taxes, and never taking a single penny from the government in food stamps or support. When Jake was 10, she married Billy, a truck driver, who embraced the kids as his own.

Almost from the womb, Sheffield was fried-chicken fed and hard-work bred, oorah. A rough-and-tumble boy, he played rugby and football  with a heart that beat out of his barrel chest. Many of his relatives had defended the country, and Jake seemed genetically engineered to follow.

Out of high school, he chose the United States Marines Corps, “because they were the meanest, the toughest, and the hardest.” There Sheffield was taught the tools of ‘by force’ and ‘any means necessary,’ and deployed to Iraq. On his first night, his unit took enemy fire and a satellite phone call with his mom was cut short.

“They’re shooting at us, mom,” he said. “I’ve got to go.” Recounting the story, Lori’s hands still tremble.

SHEFFIELD BATTLED INSURGENTS and took back territories, and survived road-side bombs and bullets whistling past his head. He finished one tour, then volunteered for a second. He returned home a man, with enough medals for things like ‘bravery’ and ‘honor’ to fill a briefcase. His dreams delayed, Jake’s single football interest came from College of the Desert. There, he delivered glamor from grunt-work, earning a scholarship to Arizona State. Soon, this hard-nosed, son of a blue-collar mother/trucker was a Sun Devil chasing quarterbacks, and earned his degree in sociology. He immediately went right to work on his master’s degree in criminal justice.

Meanwhile, the National Football League seemed the next logical chapter in this All-American-boy-apple-pie-feel-good story. Except that his four years in the military fighting for our future cost him his at the combine. The NFL, not too interested in 26-year-old rookies, snapped up Sheffield’s younger college teammates and opponents, including a few with far less football pedigree and ability.

“I’m happy for everybody who makes it,” Jake says. “But it’s difficult to watch guys you dominated on Saturdays now playing on Sundays. Clearly, God has a different path for me, and I accept that.”

This fall, with every opponent accounting for him on every snap with two, sometimes three blockers, Jake still set the single-season record with 18 sacks. In case the NFL is wondering, it’s hard as hell to stop a God-fearing, devil dog U.S. Marine.

HAIDEN SHAWN-RILEY WAS BORN December 27, 2007, while his dad was deployed fighting bad guys. Father and son didn’t meet until Haiden was six months old.  They’ve been inseparable ever since. When Jake’s not wrestling quarterbacks, he’s wrestling Haiden. Or playing Uno, Haiden’s favorite, followed by Chutes & Ladders, or Battleship.

And nope, he doesn’t let him win. “That’s what’s wrong with this country,” Jake smiles. “You want a trophy, earn it. You want victory? Fight for it.” No kidding. On Thanksgiving night, Uno cards, not bullets, were whistling past Jake’s head. When there’s this much testosterone coursing through one family, every board-game argument can’t be resolved with a simple rock-paper-scissors.

By day, Sheffield – now finishing up his master’s degree – supports his son working for Vivint Solar,  a subsidiary of SunEdison Power. By night, he is writing curriculum and developing programs to help returning Iraq and Afghanistan veterans deal with challenges like combat stress, war-related grief, anger, sleep problems, Traumatic Brain Injury (TBI), and the effects of PTSD on couples and children.

“One in five U.S. veterans returning from combat in Iraq and Afghanistan has symptoms of PTSD,” Sheffield explains. “The symptoms, like flashbacks, nightmares, anxiety, depression, insomnia, isolation – they’re very real.”

Another under-served part of the support network for military members are the parents, he says. Often burdened with the financial, psychological, family and logistical challenges of their son or daughter who served, they experience their own stress related to both deployment and readjustment that often gets overlooked. Sheffield believes he can be a catalyst for new programs within the Coyotes leadership organization that support specific strategies and offer assistance for the post-war adjustment and combat stress treatment of veterans, both active-duty and reserve-service members.

“I have a passion for my military brothers,” he says. “I believe the Coyote organization is my chance to make a difference. I feel God tugging me in this direction. This could be my calling. The call of God is not just for a select few, but for everyone. Whether I hear God’s call or not depends on the condition of my ears. Exactly what I hear depends upon my spiritual aptitude.”

JAKE SHEFFIELD IS OUR FOURTH selection in a new series, where we ask for ‘10 Things Great Coyote Dads Do.’ How is this Coyote dad juggling the journey of life, in his quest, as Super Bowl-winning coach Tony Dungy describes, to be an ‘uncommon man’ in a common world?

In his own words, here’s Jake’s Top 10 things that he is teaching little Haiden –

“You can never underestimate your role as a dad,” Jake says. “I realize that how my son views the world is largely based on how he views me. These are exciting times, and men who are moral champions are in high demand. You can’t do things the easy way. This is no time for fathers, or sons, to be missing in action.”

Keep on keepin’ on, indeed.

THE SOCAL COYOTES NON-PROFIT sports leadership organization encourages the development of young leaders through a series of questions: Do you protect the women under your care? Do your children look to you with confidence? Do other men look to you as someone to emulate? Can your community call on you for strength and leadership? Are you a preserver of culture and a champion of society? Are you a man fulfilling your destiny? Are you a man after God’s own heart?

FOR MORE GREAT things that great dads do, we recommend the book 10 Great Things Dads Do – Strategies for Raising Kids, by fathering expert Rick Johnson.

IF YOU WANT THE COYOTES to visit your school, church or business, or for more information, contact Ron DiGrandi, Community Outreach Director, 760.285.7073.