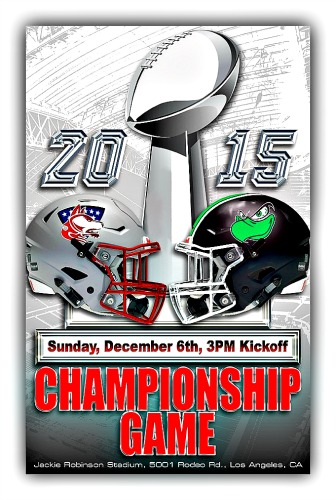 (PALM SPRINGS) – Study to be quiet, and mind your own business.

Those words – taken from scripture in First Thessalonians 4:11 – are often used by the senior leadership of the red-hot, three-time champion SoCal Coyotes, who are riding a 12-game win streak and preparing for their sixth championship game appearance this Sunday at 3 p.m., at Jackie Robinson Stadium in Los Angeles. 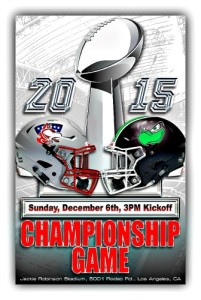 Not nearly as fascinating as Manziel-madness, but definitely Belichick-balanced. The Coyotes are an organization engineered from the top down to embody its creed of faith, family and football. ‘Defending the Shield’ for the Coyotes is simple: Accountability, humility, and utter professionalism from every participant, staff and players alike.

“The strongest people are not those who show strength in front of you, but those with battles you know nothing about,” says head coach J David Miller, whose Coyote teams are 62-11 lifetime. “Our men are quiet warriors, men who understand it’s not what they say, it’s what they do.”

Echoes assistant head coach Shane Helms: “Every day is a do-over, every word, every action counts. Our players choose them carefully. What they say and what they do have to match.”

And match they have. The Coyotes have put up a body of work they call ‘The Miracle Season,’ ripped from the depths of what almost became The Season That Never Was. It started forgettably, and tragically, in San Diego on August 8. The Coyotes were stunned 17-16 by the Stallions in a game that left the team devastated with injuries, and the season in doubt. Twelve players went down – six for the year, including franchise quarterback Michael Karls.

“Excuses and alibis are the enemies of accountability,” Coach Miller said afterward. He blamed himself for the opening-day loss – and vowed his team would find answers. The Coyotes retooled and rebuilt.

Before rosters locked, they added key free agents such as linebacker Gary Young, and promoted walk-ons like linebacker Will Hoglund. A true miracle occurred when rookie quarterback Zach Adkins, fresh from the NFL Super Regionals – walked in the front door and snatched the keys to the Coyotes high-octane Run ‘n’ Shoot. Then, bolstered by returning healthy veterans, the Coyotes got off the mat and answered the bell. They reeled off 12 straight wins, recorded five shutouts, and landed thunderous shots, winning by scores of 76-0, 75-0, and 102-0. In a rematch with the Stallions, they offset their only loss, winning easily, 61-0.

Through it all, in an era of the horn-blowing, self-glorifying, post-modern athlete, who tweets, snapchats and reacts to 24-hour news cycles like a teenage girl, the Coyotes are a blast from the past. Silent mostly, available always, service-minded, with priorities on becoming better fathers, husbands and men. For instance, second-year defensive back John Paiz, all of age 20, who not only led the team in tackles (35), but also led the Coyotes in community service, handing out dictionaries to elementary schools and teaching the team’s leadership currculum in local middle schools.

It’s impossible to get a single Coyote player to talk about himself. The disciplined 12-1 Coyotes police themselves, respect their coaches and team captains, adhere to a strict chain-of-command and code of conduct, sidestep controversy, ban negative social media, are unabashed in their faith, and swift to praise one another.

In a word, boring. Or successful, whichever you prefer. But when the lights come on, this team is anything but boring – rather, a buzz-saw of thrilling playmakers averaging 50-plus points a game, exploding in torrents of touchdowns, and bone-rattling sacks and defensive stops. The Coyotes ‘Silver Stretch’ Run ‘n’ Shoot is the league’s number-one ranked yardage offense, and the ‘Darkside Defense’ surrendered the fewest total points. Kicker Dan Kelly and punter Alex Dunnachie lead the league in touchbacks, field goals, extra points and net yards.

To a man, every player deflects credit to a teammate. Arizona State defensive end Jake Sheffield, who, by the way, is the all-time Coyote sack leader (38), and this fall, set the single-season sack record (18), wants you to know that Delta State nose tackle David Williams, who led the league with 31 tackles for loss, “is the difference for us defensively.” But if you ask Williams, he says that “Jake is the reason we get so much pressure. He’s one of the most fundamentally sound and football-smart guys I’ve ever played with.”

“We trust each other, we trust the system, we trust our faith,” says College of the Desert linebacker Ryan Pervine, whose 10 tackles for loss, seven sacks and three interceptions would lead many teams. “When your train is going through some dark tunnels, you better trust the engineers.”

Keep listening. This praise train keeps rolling. “Shaine Boyle really helped make me a complete player,” says West Alabama cornerback Ridge Turner, in credit to former Coyote Boyle, who re-signed mid-season with the LA KISS. Meanwhile, the Coyotes other corner, Texas El-Paso rookie Nick Gathrite, says that veteran free safety Anthony Spencer “has really taught me what it means to be a pro.” Gathrite had five interceptions, and led the league with 18 defensed passes.Turner was second with 10.

“I’m really proud of Nick and Ridge, and LeRon (Wilson) has made the difference this year in our secondary,” says Spencer, who shut down teams this year with game-changing interceptions, sacks and thrilling open-field tackles. Wilson hasn’t said a word all season, choosing instead to let his team-leading seven interceptions do the talking.

“I’ve never been on a team this good, and this humble,” says ‘Coyote Lite’ linebacker Cody Carhart, an understudy to Utah State’s Cade Cowdin, Devin Jones and N.C. State’s Robert Caldwell, the latter of whom went to camp with the Houston Texans and Cleveland Browns. “Nobody here has an ego. For us rookies, every day is shut up, listen and learn.”

It’s more of the same with the offense. Case in point – lethal slotback James Calhoun. A league MVP candidate with a staggering 1,562 yards receiving and 27 touchdowns – Calhoun says the success of the Coyotes top-ranked Run ‘n’ Shoot offense has everything to do with the team’s fleet of other star receivers, like Stevie Will (685 yards), Rashad Roberts (593 yards), Billy Eichman (299 yards), Mario Brown (273 yards).

“Man, they’re all so good, and we’re all having so much fun,” says the quiet Calhoun, who – not a misprint – has benched himself occasionally to give Gathrite opportunities as a punt returner. “Every one of our guys can take over the game. it’s just a blessing to be out there with them and fun to play on a team like this.”

But if you ask any of the other receivers, they gush about the jaw-dropping skills of Calhoun, or the electric slide of running back Warren ‘Lil’ Train’ Matthews Jr., who led the league with 1002 yards and 13 touchdowns, on just 74 carries.

Meanwhile, back at the ranch, this week was just “another day at the office” for the Coyotes. Players systematically broke down film, reviewed every frame, calmly discussed assignments, and methodically began to ramp up the intensity for Sunday’s final showdown of the year. Coach Miller fielded several calls from Arena Football League coaches, who wished the Coyotes luck on Sunday – while requesting game film on a handful of his team’s superstars. Namely, quarterback Zach Adkins, whose 58 touchdowns and franchise-record 3,599 yards, against just four interceptions, has made him a candidate for league Offensive Player of the Year, and will certainly earn him some private workouts.

“I’m just blessed to be here,” Adkins says. “I’m grateful for this opportunity. You have to hand it to my offensive line. I’ve hardly been touched.” Bam. You didn’t really think the hogs – Ray Argueta, Victor Gil, Cedric Cox, John Zazueta, Andrew Dueber, Johnny Rosales and Seung Jun Oh – would get overlooked, did you?

Coach Miller marvels at the development of his young charges. “We’ve matured,” he says, “and it’s powerful to witness 50 humble young men, having the most fun they’ve ever had, all pulling the cart in the same direction.

“They accept their roles and responsibilities. They’re not chasing approval or acceptance or recognition. They quietly go about their business. They pray together, play together, and when it gets tough, stay together. This season reminded us that a superb product requires a superb process.

“It’s not about external appearance. It’s about internal stability.”

DOWNLOAD THE FREE COYOTE MOBILE ‘YAPP’ – The Coyotes – thanks to partner GoMobile Solutions – were among the first professional football programs at any level to provide a mobile application. It provides Coyote fans around the world up-to-date news, statistics, roster information and much more. The Coyote Mobile ‘Yapp’ is available free on iTunes Store or Android Market by searching ‘SoCal Coyotes.’