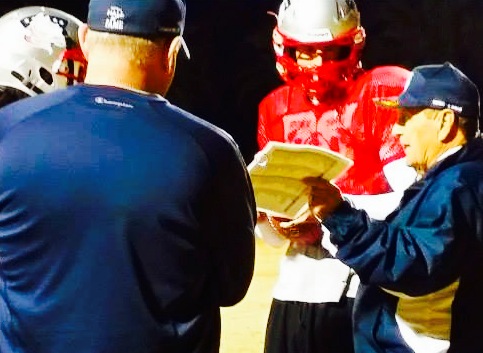 (ANZA) – As the sun rises over the mountains this Saturday for the start of the two-time champion SoCal Coyotes fifth training camp, and first here, at breathtaking Hamilton High School, a familiar and comforting sight will greet fans who make their sojourn to witness ‘football in the clouds.’

Lewis, a final cut of the AFL’s San Jose Sabercats in 2013, throws a touchdown every 10 attempts. His cannon arm last season put 70-plus-yard daggers through seven different teams. The magic at the heart of this production, however, is a unique, dynamic, trusting relationship between head coach and player that few tandems in the sport can rival.

“They have their own language,” agrees assistant coach Spencer Lee. “Only Coach Miller can talk to Nate. They don’t run this offense. They inflict it. They know what they’re doing, and when he’s on, Nate just administers pain. Nate trusts Coach. Coach trusts Nate. Sometimes, they will communicate with just their eyes, without saying a word.”

But drill down on the Miller-Lewis relationship deep enough, and despite all the numbers, the two championships, the national championship runner-up, an undefeated spring season, and you’ll discover the heart and soul of this offense is actually Darrel “Mouse” Davis himself, the godfather of the Run ‘n’ Shoot and the modern four-wide offense.

Davis, a Miller mentor for three decades, has schooled the coach since 1984, preaching that it’s ultimately the relationship between player and coach that makes the difference. For Mouse, it was Neil Lomax, June Jones and Jim Kelly. For June Jones, it was Warren Moon, Jeff George, and Colt Brennan.

Since 1987, Coach Miller has worked with other dominant quarterbacks, but clearly, his relationship with Lewis is special. The coach has tirelessly sought to provide Lewis the resources, weapons and opportunities to wring every last ounce of talent from his quarterback’s right arm – including one-on-one instruction from Mouse Davis himself.

Davis is known to appear on the Coyote sidelines, and worked for a solid week this past January with Lewis. “The Big Nater,” as Davis calls Lewis, “really gets it. He’s a really big, strong, kid who thinks his way out of just about anything you can throw at him. The Nater understands that we have a solution for everything the defense does. He’s got superb decision-making skills, and he’s got a big-time arm that can put it on you anywhere he wants it. But most of all, he’s just a super kid.”

Nobody questions that Miller has learned from Davis how to get the most out of his quarterback.

Most of us are already familiar with Lewis’ amazing backstory. Prep superstar at Cathedral City High School, MVP at College of the Desert, settles on Fairmont State. Breaks his collarbone, finishes at Dixie State. Returns home to Cathedral City, bounces around semi-pro, and was about to give up on football.

In 2007, Miller was writing an award-winning book about faith, hope and redemption with now-SMU head coach June Jones, and then, in 2011, teamed with former legendary agent Jerry Argovitz, who lives in nearby Rancho Mirage.

Argovitz insisted that Miller move from Florida to Palm Springs to finish their collaboration, “Super Agent: The One Book the NFL and NCAA Doesn’t Want You to Read,” a 320-page slice of NFL history which sold out in Barnes & Noble. When Miller finished the book, he almost returned to Florida – but the sidelines came calling with the birth of the SoCal Coyotes, and his introduction to a walk-on quarterback named Nate Lewis.

“Early on, I think we realized pretty quick we needed each other,” says Coach Miller. ”Funny how time flies. When Nate threw his first touchdown for us, he and his bride (wife Megan) didn’t have any kids. Now they’ve got two — Parker and Wyatt. Nate and I spend as much time now talking about how we can be better husbands and better dads as we do about beating the blitz.”

In the Coyotes, Miller has relied on a life’s worth of football relationships to build a franchise that has become a model for every developmental football team in America. Most importantly, however, he resurrected the dreams of Lewis and gave his quarterback a stage on which to shine.

Coach Miller, married eight years to wife Laurie Beth and with four daughters of his own, “is one of the hardest-working men I know, and a man of his word,” says former record-setting Tampa Bay Storm quarterback Shane Stafford. “He is passionate about everything he does, and that includes the success of Nate Lewis.

“Great quarterbacks don’t just play great for anybody,” says Stafford, who met Coach Miller when the latter was the Senior Vice President of the Tampa Bay Storm. “It has to click. There has to be a mutual respect, a mutual trust.”

Make no mistake: In Coyote land, it clicks. Miller is enormously proud of Lewis, realizing the on-field success of the Coyotes rises and falls with the rebirth of Lewis, who calls his own plays.

“Most coaches love the sound of their own voice,” says Miller, “but no matter what any coach says, here we believe the quarterback has a feel for the game and view of the defense that no coach on the sideline can ever have. I make strong suggestions. But Nate’s eyes have to see it, his mind has to want it, and his body has to agree to deliver it.”

Lewis and Miller share an electricity felt by every player on the field.

Grateful for each new season, Lewis understands that he will be asked to prove himself all over again to the football gods. He is humbled and challenged by the sport he loves. Now, at age 29, Lewis works tirelessly at even the most mundane aspects of quarterbacking, reminding every defense that “The Sheriff” is probably the greatest quarterback they will ever face.

Never far away is Coach Miller, pushing Lewis to take over games, again and again and again. It’s the tale of a coach and a quarterback tandem who have combined to rain down hell on defenses like no other in the history of desert football.

“You have to have trust to be great in this game,” says Coyotes Hall of Fame center Brian “Porkchop” Gollnick, who un-retired for what will be his 11th and final pro season. “There’s a relationship between Nate and Coach Miller that says this is a friendship that goes beyond just work or football.

“When those two are working together, it just feels like family. Coach Miller tells us he gets goose bumps every time he puts his arm around Nate, they agree on what they see out there, and Nate comes trotting back out to the huddle.

“It’s obvious that even Coach is excited to see what Nate Lewis does next.”

THE COYOTES OPEN TRAINING THIS SATURDAY, AUGUST 2, at 8 a.m. at Hamilton High School. For more information, click “Events” on this page.

To learn more about the SoCal Coyotes organization, visithttp://en.wikipedia.org/wiki/SoCal_Coyotes, or www.thesocalcoyotes.com.

The Coyotes open the regular season at home August 16 against the California Tide.