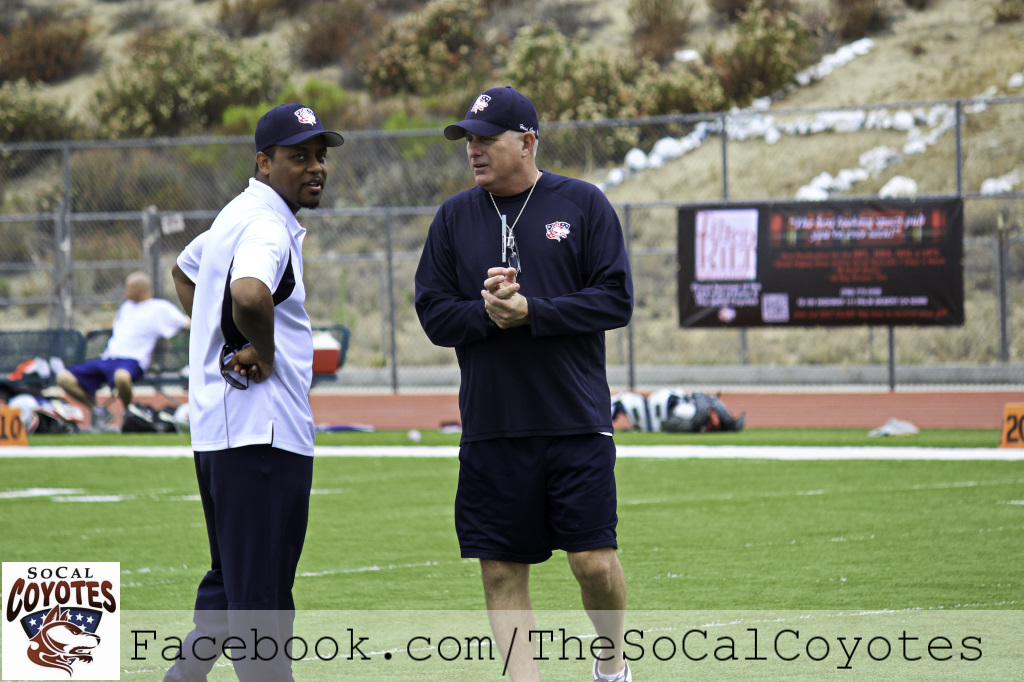 With a single word, Don West Jr., senior vice president of football operations for Steinberg Sports & Entertainment, delivered his verdict on the two-time champion SoCal Coyotes organization, after witnessing a four-hour combine/workout/practice at breathtaking Hamilton High School — and the start of 2014 training camp that opened and closed with coaches, staff and players huddled on their knees in prayer.

The skies seemingly opened with rain on cue, as new players came from as far away as six different states to earn the right to wear a Coyote jersey and ‘Defend the Shield.’

Coaches and administrators from other organizations drove hundreds of miles to watch the strictly disciplined Coyotes ‘machine’ systematically deliver a tightly organized tryout that segued into base installs, 7 on 7, then a full team scrimmage, with the Silver Stretch engaging in 12 drives against the Darkside.

But it all started when head coach J David Miller set the tone. “To be respected, you have to be respect-able,” he told his troops from the outset. “We don’t use the f-word or the n-word here. We pull up our socks and tuck in our shirts on game day. Everything we say and do is a reflection of our organization, and the man playing next to you, and his hopes and dreams, too.

“The question isn’t whether you’re talented. All of you are, or you wouldn’t be here. It’s whether you can be held accountable, encourage one another, and play selflessly as one. We’ll keep the guys who can, and the ‘I-me-mine’ guys who can’t — save yourself some time and get on down the road.”

The Coyotes won’t don pads until next week, but regardless, the ‘Darkside Defense’ wasted no time delivering a message that it is a unit to be feared. Among the 20-plus hopefuls that joined the returning Coyote veterans, it was evident the Coyotes are dead-serious about another playoff run.

It was also clear that veteran record-setting 6-5, 235-pound quarterback Nate Lewis – ‘The Sheriff’—has a mastery of the team’s Silver Stretch Run ‘n’ Shoot attack that “looks like Jim Kelly and the Buffalo Bill’s K-Gun,” according to one high school coach, who observed practice.

The Coyote stars were out in force, but onlookers couldn’t take their eyes off the linebackers. Miami’s 6-5, 275-pound Kelvin Cain didn’t disappoint, both as a pass-rusher off the edge, and with his ridiculous speed and wingspan as a linebacker. Utah State LB Cade Cowdin and LB Devin Jones (Houston Texans) played error free and were never fooled. And then there was LB Robert Caldwell, most recently from the Cleveland Browns.

“This is the best linebacking corps in AAA football,” said Jeff Belknap, co-owner of the Las Vegas Lions, who worked the camp as a Coyote consultant.

“I’m not sure I’ve seen that many great linebackers in one place at one time,” agreed Hamilton High School head coach Keith Moorman. “I already had high expectations, but this is a professional football team.”

Lewis threw five touchdowns, but was picked off twice, once by Cowdin, who earlier in the day ran a pair of 4.4s in the 40. “This defense is so lightning fast, these guys just lay in wait and recover after the ball’s in the air,” said Belknap. “Not much you can do about that, not even Nate, as great as he is. This defense is wicked. Nate is a brilliant quarterback, and very few quarterbacks have his ability. This defense is going to expose teams.”

Clearly a handful of new rookies will make an immediate impact. Among them defensive lineman Aaron Davis (Mayville State), who battled rookie tackle John O’Brien, with both earning a roster spot. Mammoth All-American lineman Ken Van Heule demonstrated he could play both guard and tackle – with the speed to trap and pull.

“The Coyotes are legit,” said Davis. “I’ve never seen an organization run like this on opening day.”

Speaking of legit — Rashad “The Franchise” Roberts, who holds every single club receiving record, still worked out with the rookies during tryouts, and for the fifth straight season, clocked two 4.3s.

THE COYOTES OPEN AT HOME ON AUGUST 16 against the California Tide. For more information, click “Events” on this page.

To learn more about the SoCal Coyotes organization, visithttp://en.wikipedia.org/wiki/SoCal_Coyotes, or www.thesocalcoyotes.com.