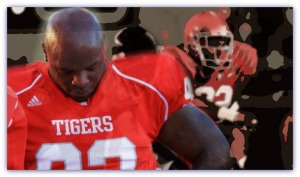 “I’m blessed to have this opportunity to continue my career with the SoCal Coyotes,” said Packer, who will rejoin former West Alabama teammates DB Ridge Turner and WR Chad Toocheck.

“This is a great organization, and I believe it’s the best program in the country if you’re serious about getting your life on track, being a man, and winning championships,” Packer said.

The prize defensive recruit brings an impressive football resume to the Coachella Valley. Prior to West Alabama, Packer played two seasons at Mississippi Gulf Coast Community College, where he started and led the Bulldogs to back-to-back Mississippi Bowls on a team that went 20-4.

Rivals.com ranked Packer as the number 12 player in the state coming out of Moss Point High School, where he was recruited by an array of D-1 schools. He spent his freshman year at Southern Mississippi, before transferring.

The son of Jackie Willis and Willie E. Packer, he was a first team All-Region 7-4A squad, 1st Team All-State in Class 5A, 2nd Team All-State by the Clarion-Ledger, and was a defensive MVP in the Mississippi/Alabama All-Star Classic. A Clarion-Ledger Dandy Dozen product, Packer was nationally ranked No. 23 by Scout.com at the defensive tackle position.

Packer reports to the Coyotes July 28, where he joins an incoming rookie class expected to rival any in franchise history. The Coyotes, who went 11-1 last fall, are the defending LCFL champions. This will be their first season in the vaunted Southern California Football League, home to four of the nation top 10 teams.

DARKSIDE DEFENSE – Packer joins a stacked ‘Darkside Defense’ that returns eight starters from the 2015 LCFL championship team that beat the Inglewood Blackhawks an unprecedented three times (each by 18 points) in one season. The Coyotes defense has added three All-American rookies and return depth at every position.